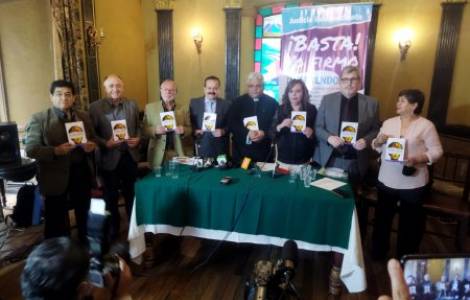 La Paz (Agenzia Fides) - From January 25, Bolivian citizens will be able to participate in the collection of signatures for a referendum on judicial reform. The initiative of a group of independent jurists is joined by the Catholic Church, through the Bolivian Episcopal Conference (CEB), and by civil society organizations, as reported by the Fundación Jubileo, a Catholic institution working in the political, social and economic fields.
During a press conference to present the initiative, José Antonio Rivera, of the Group of Jurists, yesterday announced the adhesion of the Catholic Church and the network of non-governmental organizations working in the field of justice and the protection of human rights Unitas (Unión Nacional de Instituciones para el Trabajo de Acción Social). "These are the most important institutions that join this national crusade so that, in an organized and territorial way, we proceed to collect the signatures of adhesion of the Bolivians", declared Mr. Rivera.
The objective is to collect, within three months, 1.5 million signatures throughout the country, or the equivalent of 20% of the electorate, necessary for the holding of the referendum. The collection will begin in the nine chief towns of the nine departments in which the nation is divided, and will then extend to the other localities. Public spaces will be set up for this purpose and the operation will also be carried out "door-to-door". Once the necessary signatures have been reached, the Supreme Electoral Tribunal (TSE) can organize the referendum between August and September.
The promoters explained that, through this initiative, they want to obtain "effective, transparent and rapid justice, with independent judges and magistrates". Indeed, Bolivian justice is undermined by the slowness of trials, corruption, the population's difficulty in accessing the judicial system and political pressure on judges and magistrates.
Monsignor Aurelio Pesoa, O.F.M., Apostolic Vicar of Beni and President of the Episcopal Conference of Bolivia, in his homily during the mass celebrated on Sunday January 15, underlined, among other things, that "only truth and justice will bring us peace and serenity, not only for some, but for all. How much peace and serenity our homeland needs, in these days when it is seriously wounded".
For more than a month, Bolivia has been shaken by strikes, roadblocks and violent clashes following the request of the Department of Santa Cruz, the most important in economic terms, to bring forward the population census, in order to prevent the department from suffering economic damage and political representation in the next election. The clash between supporters and opponents has spread to other places in the country and has taken on a political connotation (see Fides 25/11/2022; 30/11/2022). Although the proposal was finally accepted by the competent authorities, the climate of polarization and violent confrontation shows no signs of diminishing.
In his Sunday homily on January 8, the feast of the baptism of Jesus, Monsignor Sergio Gualberti, Archbishop Emeritus of Santa Cruz, spoke of John the Baptist. "To be just before God, he said, necessarily requires promoting justice and law also in one's relations with others, with the whole world and with created goods: 'I, the Lord, have called in righteousness...to be a light to the nations...to open the eyes of the blind and bring captives out of prison.'" This mandate from the Lord is a serious alarm bell for our society, where the vast majority of the population feels powerless and suffers from an administration of justice that is partial and subservient to the interests of the "powers of the moment". In conclusion, he insisted on the fact that "the construction of a world different from that of today, where justice, freedom, truth and the common good constitute the referential and normative framework for all, is part of our vocation and our mission as Christians". It's not politics, committing yourself to justice". (SL) (Agenzia Fides, 18/1/2023)

AMERICA/MEXICO - Referendum on the revocation of the presidential mandate: for the Bishops "it is a decision of great responsibility"