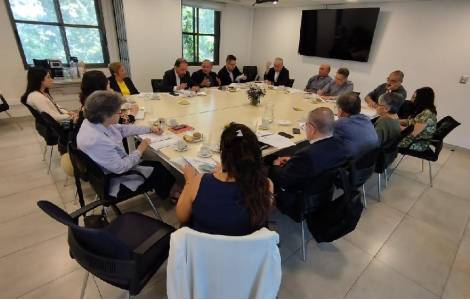 Santiago (Agenzia Fides) - The great concern for the difficulties that hundreds of immigrants are facing, especially the most vulnerable ones, to regularize their status in the face of a law deemed "inflexible", was expressed by the Chilean Bishops during a meeting with representatives of the state and civil society.
The meeting, which took place in the premises of the Episcopal Conference of Chile, in Santiago, was attended by the Bishops of the Standing Committee, who convened it, and representatives of the Migration Division of the General Direction of Consular Affairs, Immigration and Chileans abroad; from the Migration Department of the Ministry of Foreign Affairs; of the National Office of Religious Affairs, Caritas Chile, the Catholic Institute for Migrants (INCAMI), the Jesuit Migrant Service and the Conference of Religious, CONFERRE.
The participants in the meeting, according to the note of the Episcopal Conference sent to Fides, shared the concern of the Bishops on the process of regularization of immigrants, as well as the need to support the communities in which large migratory flows arrive. The need for greater coordination of the state agencies that deal with these problems was then highlighted, to facilitate procedures, as well as to move forward in a migration policy that allows for the search for formulas for faster regularization.
Of particular concern is the situation of displaced children and those applying for refugee status. In this reality, the contribution of the Church in accompanying migrants to the various local realities of the country was valued, and it was agreed to continue the talks between the realities present and to convene new meetings with other organizations on the current migration problem. The Archbishop of Concepcion, Fernando Chomali, who led the meeting on behalf of the Standing Committee of the Episcopal Conference, stressed that all procedures must always be based on the person. "Let us remember that the person is the center of every political action, of every social action. We think we can shed some light on this sector, so that Chile is a welcoming country, but also one that integrates. Because it is not enough to welcome, it is necessary to integrate". Monsignor Chomali appreciated that in all the dioceses of Chile there is a migratory pastoral care "where they welcome defenseless people, without documents, without the possibility of including themselves into society. We are talking about young people, the elderly, and above all children and many of them who unfortunately have no country, do not have a birth certificate and we can offer a contribution according to the Gospel, the social doctrine of the Church, because the Lord tells us 'I was a foreigner and you welcomed me". For some time now, organizations and institutions working with migrants and asylum seekers in different parts of Chile have been drawing attention to the difficulties faced by people arriving in the country as well as the communities that host them. There have also been episodes of intolerance and xenophobia. The situation has worsened following the massive waves of refugees from Venezuela and Haiti, and due to the consequences of the Covid 19 pandemic. According to estimates by the National Migration Service (SNM) of Chile, as of 31 December 2021 (latest data available ) resulted in a total of 1,482,390 foreigners, among these the most numerous groups were, in order, Venezuelans, Peruvians and Haitians. As for the size of the illegal immigrant population, the Jesuit Migrant Service of Chile (SJM) said that "by its very nature, it is impossible to know for sure". Chile has a population of 19,490,000 (2021). Since April 2021, Chile has had a new migration law, replacing the previous one dating back to 1975, which provides for greater rigidity on border controls and accelerates repatriations. On March 11, 2022, 36-year-old Gabriel Boric, winner of the runoff on December 19, 2021, began his term as President of the Chilean Republic. In a letter sent to the new President a few weeks after his election, the Chilean Catholic Institute of Migrations (INCAMI), had asked for his attention in order to assume a transparent attitude towards migrants in Chile, since there was little clarity in the process of implementing the new law (see Fides, 31/3/2022). (SL) (Agenzia Fides, 12/1/2023)