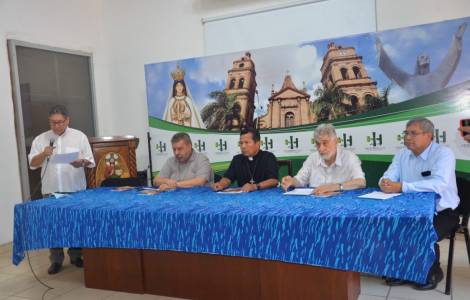 Santa Cruz (Agenzia Fides) - "The Pastors of the Catholic Church of Santa Cruz, stand in solidarity and echo the cry of the people, asking that, once and for all, the problem be solved and that the City and Department can resume activities, jobs and daily life immediately". This is the latest appeal launched by the bishops to unblock the situation. In fact, for 34 days, the department of Santa Cruz, the largest and most economically important in all of Bolivia, has been carrying out a general strike with roadblocks to demand that the Government carry out the Population Census in 2023 and not in 2024, since the postponement would cause the region economic damage and political representation in the next elections.
The strike has triggered a series of clashes, including violent ones, between supporters and opponents of the government, which have acquired political connotations and have spread to other Bolivian cities. Bishops, religious and lay people have spoken on several occasions calling for an end to violence between brothers, the suspension of roadblocks that affect the weakest sectors of the population above all, and the solution of the problem by the competent authorities, leaving aside any personal, partisan or sectoral interest, looking at the common good and the service for which they were elected (see Fides, 28/10/2022; 4/11/2022; 18/11/2022).
According to the latest news gathered by Fides, the leaders of Santa Cruz have accepted that the population census be carried out in 2024, since their proposal to carry it out in 2023 is not technically viable, and yet they have confirmed the regional strike waiting for Parliament to pass a law on the census. The announcement was made in a joint statement by the governor of Santa Cruz, Luis Fernando Camacho; by the Vice-President of the Regional Civic Committee, Stello Cochamanidis, and by the Rector of the Gabriel René Moreno Autonomous State University (Uagrm), Vicente Cuéllar.
The Bishops of Santa Cruz de la Sierra therefore launched a new appeal, significantly entitled "Peace be with you" (cf. Jn 20:19), in which they underline that the prolongation of the general strike and the blockades in the Department, in addition to causing serious damage to citizens, institutions and the educational, health, labor and social world in its daily life, "represents a great sacrifice and causes particular suffering and pain to the poor, the sick, the lonely elderly, occasional workers and the countless vulnerable and needy brothers and sisters".
Although they appreciate the spirit of courage and love for this land with which the protest over the census issue is taking place, however, the bishops stress that "this situation is becoming more unbearable every day and threatens to turn into rebellion, with unforeseeable consequences, due to the indifference and lack of response from the authorities and state institutions".
The Bishops of Santa Cruz conclude their message, which bears the date of November 24, 2022, invoking the "Mamita de Cotoca", Patroness of Santa Cruz and the Bolivian East, so that she "touches the hearts of the authorities and of all citizens, stop violent and confrontational attitudes, work for the common good and not for particular interests, look for what unites us and we can all live as brothers and in peace". (SL) (Agenzia Fides, 25/11/2022)