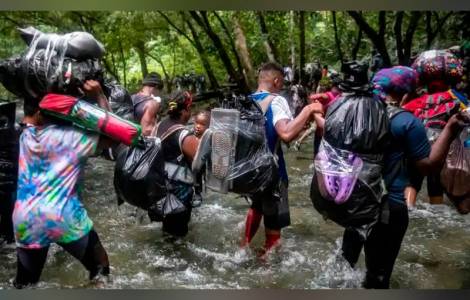 2022-12-22
Nuncio's visit to Chocò: increased challenge for confidence in the future, bet on peace, inter-institutional work

2022-12-19
Another year of violence: Bishops of Chocò call for a Christmas truce

2022-12-12
The first phase of the peace talks between the Government and the ELN, the Colombian Church "permanent companion" concludes

2022-12-05
Violations of environmental and social rights in Latin America and the Caribbean: accompaniment of the Church

Apartado (Agenzia Fides) - "The migrant community, which brings together various nationalities, has shared with us all the vicissitudes they have to face to reach Necocli, and the fears of crossing the so-called 'Darien hell', due to situations of illness, theft, violations, accidents and exploitation by those who see in them an opportunity for great economic gains, without any institutional, local or national control".
The dramatic denunciation comes from the Bishops representing the Presidencies of the Episcopal Conferences of Venezuela and Colombia, who met on November 21 and 22 to address the migratory crisis of thousands of Venezuelans, Haitians and Ecuadorians, who cross the dangerous Darién jungle on their way to the United States. The meeting took place within the framework of the campaign "At the feet of the migrant", organized annually by the diocese of Apartadó. This is the second meeting of the Episcopal Conferences of the two countries to address the migration crisis, after the one held in October 2022 in the city of San Cristóbal (see Fides, 18/10/2022; 14/10/2022; 29/9/2022).
According to information released by the Episcopal Conferences of both countries, the Colombian and Venezuelan bishops met some migrant families in the port of Necoclí, in the Urabá region of Antioquia, where thousands of migrants arrive before heading to the border with Panama. In the facilities of the Nuestra Señora del Carmen parish, they listened to their painful stories of uprooting, the reasons that led them to want to settle in Colombia or to decide to migrate to other countries. The Bishops also went to the docks of the port, and distributed kits to people in transit. The action of the Catholic Church is permanent in the cities of Necoclí and Acandí through the daily work of the National Social Pastoral and that of the diocese of Apartadó, Caritas Colombiana, the Clamor Network, the Franciscan Sisters of Mary Immaculate and the Juanist Sisters.
The two-day agenda also included a meeting of the Bishops with representatives of local authorities, the Ombudsman's Office, Migration Colombia, UNICEF, IOM, UNHCR, the Colombian Red Cross, Mercy Corps and WORLD VISION. The topics discussed were the characterization of the latest wave of migrants, families with children, adolescents and the elderly; human trafficking; sexual and labor exploitation; unaccompanied migrant children and adolescents. Aware that the problem is not a single nation but a regional one, the Colombian and Venezuelan Bishops have committed to prioritizing all initiatives and projects to help migrants through social ministry and Caritas Colombia and Venezuela.
In the final statement issued at the end of the visit, the bishops point out that "the mixed migratory flow in Urabá Darién continues, and continues to generate continuous challenges for all the actors." They then recall that migrants and refugees, forced by poverty, political conflicts and violence, "have been forced to leave their countries of origin, in search of better living conditions and future opportunities for their families".
Thanking the different organizations that work in coordination to guarantee the respect and human dignity of immigrants, the Bishops have launched an appeal so that "the right to human mobility is respected, foreigners are welcomed, all closed and violent nationalism is overcome, and stop all xenophobic actions, contempt and mistreatment of foreigners." In addition, immigrants must be accompanied by all means, especially in the institutional sphere, to avoid human trafficking, all kinds of violence, exploitation... They must be offered opportunities for integration, as individuals and as families "All public bodies must commit to promoting safe routes that respect human rights". (SL) (Agenzia Fides, 23/11/2022)