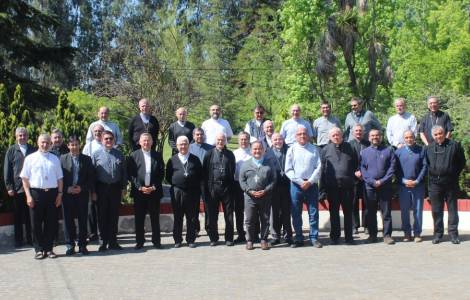 Lo Cañas (Agenzia Fides) - "We want to encourage all initiatives that lead to social dialogue, civic friendship and the common good, especially the constituent process, which requires recognition and listening to all sectors. Those of us who profess the Christian faith are called to be active protagonists of the changes that Chile needs, encouraging the instances of solidarity present in society that work for social justice". This is the exhortation of the Chilean Bishops at the end of the plenary Assembly of the Episcopal Conference, which was held from November 14 to 18 in Lo Cañas.
"We perceive the seriousness of social insecurity, violence and crime experienced by so many of our compatriots and some of our communities – they write -. We are aware of the economic and spiritual precariousness of so many families, plagued by inflation and discouragement. We are witnesses of hopelessness in many young people and adults; we also encourage the integration of migrants into our society". The bishops share the message with the intention of "encouraging our ecclesial renewal and also to commit ourselves to the path of conversion."
Recalling the III National Ecclesial Assembly held recently, with the participation of representatives of dioceses, religious communities, apostolic movements, educational realities: the bishops say that it was "a profound spiritual experience and pastoral renewal to continue our evangelizing task of announcing Jesus Christ".
For this reason, the Chilean bishops are committed to a path of conversion and to encourage and guide the communities to continue deepening the synodal processes.
In this Plenary Assembly, the bishops also approved the way "to implement in Chile the institution of the ministry of the Catechist, as proposed by Pope Francis in the document Antiquum Ministerium". Each diocese will have to make a discernment with the faithful who can be called to this lay ministry, "which is especially at the service of the animation and conduction of the processes of Christian initiation and ongoing formation in our communities."
The Bishops concluded by recalling that their Assembly took place in the context of the Month of Mary, "Mother of Chile and woman of hope, whom we hope to celebrate in her numerous Shrines throughout Chile, on December 8, in her Feast of the Immaculate Conception. She accompanies us in the season of Advent, which prepares us for the birth of Christ, the one sent by the Father".
The popular referendum held in Chile on September 4 rejected with 60% of the votes the project of the new Constitution, elaborated at the end of a long process that began with popular protests in October 2019 throughout the country, causing deaths and wounded. The crisis crossed all spheres -political, economic, social and ecclesiastical- with mobilizations, violence and confrontations. The plebiscite of October 25, 2020 (see Fides, 27/10/2020) sanctioned the start of the process of elaboration of a new Constitution, entrusted to a "Constituent Convention" elected by the citizens (see Fides, 3/7/2021).
On March 11, 2022, Gabriel Boric, 36, a student leader of the October 2019 protests, who had won the second round of the December 19, 2021 presidential elections, took office as President of Chile, proposing radically reform the socio-political structure of Chile in a progressive direction (see Fides, 11/3/2022). Meanwhile, the work for the new Constitution continued, with discussions and contributions on the text (see Fides, 25/7/2022), which provided for a final referendum of approval or otherwise by the Chileans.
More than two months after the plebiscite that rejected the project of the new Constitution, the "Justice and Peace" Commission of the Bishops' Conference, made up of lay men and women, published a reflection on the national reality by launching an appeal for dialogue and civic friendship to all people of good will, "in the context of a political, social and economic crisis that affects the daily life of people, especially the most vulnerable" (see Fides, 15/11/2022). (SL) (Agenzia Fides 22/11/2022)