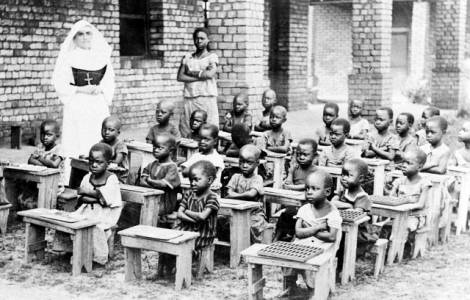 by Gianni Valente
Vatican City (Agenzia Fides) - "There is one point that is never denied in the 'missionary policy' of Propaganda Fide: the equal dignity of each culture, the obligation to use local languages and not to not impose your own. The need to bring faith and not Western culture to the world". And this is one of the distinctive traits recalled by the historian Gianpaolo Romanato among the "genetic traits" that have marked the history of the Sacred Congregation "de Propaganda Fide" since its creation 400 years ago. The Venetian historian, professor of modern and contemporary Church history at the University of Padua, had the task of drawing the conclusions of the International Congress "Euntes in mundum universum", held at the Pontifical Urbaniana University from 16 to 18 November, on the occasion of the IV centenary of the institution of Propaganda Fide (see Fides, 15 and 17/11/2022). In his speech, divided into 4 points, Romanato offered valuable ideas to confirm that it is not appropriate to dismiss the historical events of Propaganda Fide as a relic of the past, and that many ideas that appeared in the past in the wake of Propaganda Fide can suggest very current approaches for the present and the future of the mission entrusted to the Church. In many respects - underlined Romanato - the approach and the vision exercised in the past by the Propaganda Palace represent a precious treasure to inspire concretely the work of the Dicastery for Evangelization, called to take up the heritage of the great adventure of Propaganda Fide.

In the centuries when European colonialism invaded the world and exported everywhere the idea of Europe's superiority, illustrated by the famous cultural stereotype of the "white man's burden", to Propaganda Fide, Romanato recalled "the opposite path was followed. Not the superiority of anyone – of the white man, of the European, of the Westerner – but the equality and equal dignity of all".
The principle always affirmed by Propaganda Fide, "almost like a dogma", according to which the missionary "must learn the local language, even if it is difficult and distant", also testifies to this approach. Because "speaking the language of the interlocutor is the main way for him to feel treated as an equal", and not to feel reduced to a condition of subjugation.
"Propaganda Fide", underlined Romanato at the beginning of his speech, "can also be considered the first 'world' institution. "The Catholic Church and the Papacy were" – recognizes the professor, member of the Pontifical Committee for Historical Sciences since 2007 - "but precisely because the Holy See had to cede control and management of the 'plantatio Ecclesiae' in the new continents to the Iberian governments (the so-called Patronage rights"), a new Roman institution was created to support the growth of new Churches by "circumventing the 'Patronage' ceded to European powers".

In the exercise of its function, recalls Romanato, Propaganda Fide has become "the terminal of an extraordinary flow of world information, which has retained a central role in Rome". A flow of information also linked to the political and cultural dynamics that conditioned the "state of the world", and all this began to happen long before similar processes were activated in the great capitals of the colonial empires (Paris, Lisbon, Madrid, London) or in major international organizations such as the League of Nations or the UN. In addition, notes the professor, even today, supranational institutions put the political summits of different nations in contact, while the flows of information exchange that have been activated for centuries around Propaganda Fide were not aimed at managing "high politics", but to deal with issues related to everyday life, to the daily existence of people and communities.

In the exercise of its functions, Propaganda Fide is also faced with the enormous problem of making Catholic unity of doctrine, faith, liturgy (and also the norms of canon law) coincide with the diversity of cultures, political forms, civilizations and languages, at a time when the distances and dangers of travel also made the exchange of information precarious. Even in the 18th century, Romanato recalls, the missionaries destined for the lands of Paraguay took about a year to reach their destination: yet, despite the difficulties of the time and the limits of the instruments, "in Rome everything was read, everything was informed, everything was answered, perhaps with serious delay".
The missionaries who arrived in the Far East, or who ventured into the more impermeable American regions, such as the Andes or the Amazon, approached populations that were "radically different, with forms of civilization and languages unknown to each other". The questions they asked clearly showed that "the truth of Roman Catholicism was called upon to confront these radical diversities. Solutions had to be found which could reconcile the unity of the faith itself and of the theology which expresses it with the diversity of languages and the multiplicity of sensitivities". Saving unity by embracing multiplicity, such was the often heavy task of Propaganda Fide, which always had to demonstrate a great capacity for enormous adaptation which "also affects canon law", with the appearance of a new specific branch, that of "missionary law", which "becomes a kind of area of exception and tolerance in relation to the rules in force in the Latin Church".

Romanato also recalled the tens, even hundreds of thousands of young people whom Propaganda Fide brought to Rome from distant countries, without disturbing their culture, to support their formation and then send them back to their communities of origin. A phenomenon that can also be considered as an extraordinary experience, "a contribution to mutual understanding and respect between peoples and cultures", which began centuries before the "Erasmus" exchanges and programs implemented by by modern academic and university institutions. The Professor also denied the clichés that Propaganda Fide arrangements were always made on the basis of institutional unanimity imposed from above. Sometimes the decisions of Propaganda also passed through "furious" and long discussions between the people called upon to express themselves on questions which arose in distant countries. "The question of the Chinese Rites", Romanato recalls by way of example, remained on the table for a century. In 1939, Pius XII took up the file and canceled the decisions taken in the middle of the 18th century. In practice, this question has lasted for three centuries, and perhaps it still lasts...". (Agenzia Fides, 19/11/2022)

VATICAN - Proclaiming Jesus in all languages. The "missionary prophecy" of the Polyglot Typography of Propaganda Fide

ASIA/CHINA - When the "Union of Chinese students" of the Pontifical Urbaniana University" paid tribute to Celso Costantini, the first Apostolic Delegate in China

AMERICA/CANADA - "One cannot proclaim God in a way contrary to God himself". Pope Francis asks native peoples for forgiveness