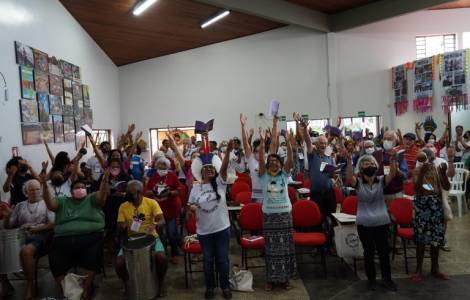 2022-10-22
Venezuelan emigrants integrated into Brazilian society through work: the experience of the "Casa Bom Samaritano"

Luziânia (Agenzia Fides) - "In these 50 years, the struggle for justice and the defense of life in its fullness has guided and totally guides the activity of Cimi, which walks in solidarity with peoples and communities, aimed at the construction of another society, inspired by the real and utopian vision of indigenous societies, in which the construction of the person prevails over the production of goods, participation over competition, reciprocity over accumulation and dialogue over the authoritarian discourse". This can be read in the 50th anniversary manifesto of the Indigenous Missionary Council (Cimi). In the Missionary Year that the Church in Brazil is currently experiencing (see Fides 28/4/2022), the Jubilee of Cimi is also in the spotlight. Child of the Second Vatican Council, an organization annexed to the National Conference of Bishops of Brazil (CNBB), it was born from the urgency of creating a pastoral defense of the indigenous peoples who, according to the ideology of the time, were destined to extermination or compulsory integration.
The Manifesto for the 50th anniversary of Cimi was drawn up by the participants in the Congress that celebrated the anniversary, which took place in Luziânia, Goiás, in the presence of more than 300 missionaries, men and women, supporters of the indigenous cause and representatives of at least 20 indigenous peoples. The participants ask "on behalf of our Church, the forgiveness of the indigenous peoples for the sins of the colonization in which we participated", thanking the original peoples whom they accompany in their tireless struggles. "The hope that is renewed in every struggle, in every movement, in every act of resistance of indigenous peoples and communities is a light, which also illuminates and guides our mission". They then renewed the pain "to see so many indigenous leaders and also so many missionaries murdered. At this moment of celebration of the 50th anniversary, let us remember the many names of these martyrs, in our memory and in our hearts".
Cimi thanks the indigenous peoples, "who taught us to live in the joy of 'happy sobriety' (Laudato Sì, 224s)"; as well as our martyrs, "who assumed the mission with all the risks that it includes and who gave their lives for the indigenous cause"; to the CNBB, "which has provided us with institutional support to navigate against destructive currents and exclusion in times of authoritarianism" and which today assumes with us the commitment to defend justice, dignity and the lives of Indigenous Peoples ; to social movements, institutions and entities, in Brazil and abroad, that share the indigenous peoples' demand for their rights, especially their lands.
"Our faith in the God of Life inspires us with horizons of liberation and reasons for hope", further underlines the Manifesto, which reaffirms that "the mission of Cimi continues", because after 50 years, "the horror has not disappeared”, on the contrary, "violence against indigenous peoples has intensified and turned into a daily struggle against their spaces, their lands, the forests that cover them, the life that throbs in all their expressions". Territories are devastated, forests set on fire, animals exterminated, water sources contaminated, sacred spaces desecrated, the mother's body is pierced in search of minerals. "Against this project of death, the mission of Cimi and its allies continues to be that of courageously and prophetically defending the cause of indigenous peoples". (SL) (Agenzia Fides, 16/11/2022)