AMERICA/CHILE - "Justice and Peace": two months after the constitutional referendum, still no shared proposal for a new itinerary 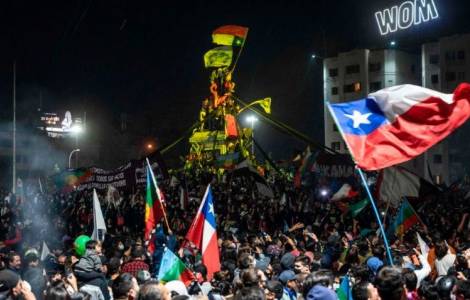 Santiago (Agenzia Fides) - In the referendum of September 4, Chileans expressed a large majority (more than 60%) of their negative opinion on the draft new Constitution. The President of Chile, Gabriel Boric, implemented a government reshuffle on September 6 that involved five ministries, including the strategic Ministry of the Interior. The positive aspects of the consultation were the high participation rate, the absence of violence and the acceptance of the results. For the Bishop of San Bernardo, Msgr. Juan Ignacio González, member of the Standing Committee of the Episcopal Conference, through the plebiscite, the Chileans raised a cry to be heard, which was addressed above all to politicians (see Fides, 7/9/2022).
Two months after the plebiscite which rejected the draft new Constitution, the "Justice and Peace" Commission of the Episcopal Conference, made up of lay people, men and women, published a reflection on the national reality calling for dialogue and civic friendship for all people of good will, "in a context of political, social and economic crisis affecting the daily lives of people, especially the most vulnerable".
Three years after the signing of the Social Peace Agreement and the start of the itinerary of the new Constitution, which sought to provide an institutional solution to the country's serious crisis, and after the September plebiscite, "the forces with the parliamentarians, despite agreed spaces for dialogue, have not yet succeeded in delivering to the country a proposal for a new itinerary that would allow Chile to be provided with a new constitutional pact, with a majority vocation and national scope".
The "Justice and Peace" Commission therefore considers it urgent that the dialogue between the various political protagonists be successful, taking into account the wishes and aspirations expressed by the citizens, and stresses that "to feel at peace, citizens must perceive the understanding between their representatives and politicians". Then he reiterates: "To reach broad agreements, dialogue and openness are necessary to go beyond previous positions. Only then can a consensus be reached for the common good of Chile".
In the final part, "Justice and Peace" invites us to take care of the institutions and the political community, "connecting with each other with honesty and sincerity, without manipulation of information or false news", because only in this way we will be sure to build a future in democracy, where to live in justice and peace. Due to their structure, social networks have contributed to the lack of dialogue and the spread of false news, "factors that threaten democracy", for this reason it invites the media and those who use social networks to be attentive and to verify the authenticity of the information.
The final appeal is addressed to Christian communities and those of other confessions, social organizations, political parties and various social groups, trade unions, universities, NGOs and other social groups, "to talk about these contents and reflect on how each of us can contribute to justice and peace in our country". (SL) (Agenzia Fides, 15/11/2022)