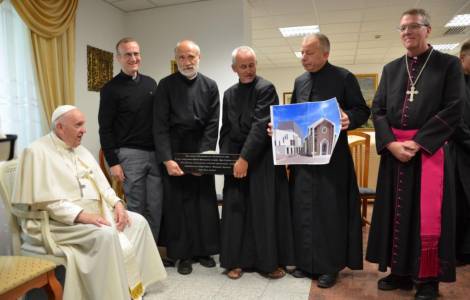 Bishkek (Agenzia Fides) - Kyrgyzstan will soon have its first Catholic cathedral. The religious building will rise in the heart of the capital Bishkek, and its first stone has already been blessed by Pope Francis. Construction work will begin in the coming winter months, and the project - presented at a press conference held in Bishkek on November 9 - is expected to be completed within 3 years.
Today, the only Catholic church in Bishkek is located in an extremely peripheral area. "In a country with a Muslim majority, there are those who do not even know the existence of the parish far from the center, also because it is not linked by means of transport and they paved the road that leads to the church only a year ago", says to Fides Damian Wojciechowski SJ, Jesuit brother, treasurer of the Apostolic Administration of Kyrgyzstan. The construction of the small church on the outskirts took place thanks to a permit granted in 1969 by the Soviet authorities to some German Catholics, a community formed by those who had been deported there during the Second World War. The land for the construction, isolated and difficult to reach, was also chosen to avoid giving the church excessive visibility. «The spaces we have now - continues the Jesuit - are very limited and do not allow us to carry out all the activities we would like. Thanks to the new premises adjacent to the cathedral, which we will have available, we will be able to propose a series of cultural initiatives, prayer and Bible reading meetings, aimed at different age groups».

The project for the construction of the Catholic cathedral is part of the remarkable urban development that has characterized the capital Bishkek in recent years. Valerij Dil ', Advisor to the President of the Kyrgyz Republic Sadir Japarov, and also to the Apostolic Administration also spoke at the presentation of the project. «The construction of the new church will also have an international significance. Our Republic adheres to democratic principles and that of the freedom to profess one's faith. The construction of the cathedral church is proof of this», said Councilor Dil ', underlining the importance that the event has not only for the Catholics present in the country, but for all Kyrgyz people.
In a Country where poverty and corruption are widespread, the Catholic Church has always shown its willingness to work at the service of the entire population. «Charitable activities have never stopped - says Damian Wojciechowski - not even during the civil war of 2010 or the recent pandemic. Currently, among the various activities in the Country, we also have a shelter for single mothers and one for children and young disabled people. Proclaiming the Gospel also means helping the new generations to orient their lives towards building a more just and welcoming society for all».
The proximity to the population and the sharing of everyone's expectations and problems naturally leads to a continuous confrontation and dialogue with Islam, professed by the majority of citizens both actively and simply as a traditional and cultural belonging. The Apostolic Administrator, Father Anthony James Corcoran SJ during the press conference for the presentation of the project said that Pope Francis blessed the first stone of the future cathedral while he was in Nur Sultan, during his recent apostolic trip to Kazakhstan. On that occasion - Jesuit Father Corcoran remarked - the Pontiff reminded all those present of the importance of the mission entrusted to the Catholic presence in Kyrgyz society: to help the many needy present. The Apostolic Administrator also stressed that Kyrgyz Catholics share with their Muslim fellow citizens the goal of "making the world around us better".

After about eight years in which the parish of Bishkek had been subjected to the jurisdiction of the Apostolic Administration in Karaganda, in 1999 John Paul II erected a mission sui iuris in Kyrgyzstan, and Benedict XVI set up the Apostolic Administration in 2006 which is still operating today. Currently some thousands of Catholics live in Kyrgyzstan, of whom about 500 assiduously attend the 7 parishes present in the Republic. The 3 main churches are located in Bishkek, Jalal-Abad and Talas. Catholics who live far from parishes gather to pray in private homes and periodically receive visits from the missionaries who work in Kirghizia. Among Catholic religious, the numerically most significant presence is that of Jesuits (10, from Slovenia, Vietnam, United States, Kazakhstan, Kyrgyzstan and Poland), but there are also members of other institutes: 5 School Sisters of St. Francis, 3 Consolata Missionary Sisters and a diocesan priest from Slovakia. A few days ago some Missionary Sisters of Charity, the order founded by Mother Teresa of Calcutta, also arrived in Bishkek and will open their own convent in the capital. (CD) (Agenzia Fides, 14/11/2022)