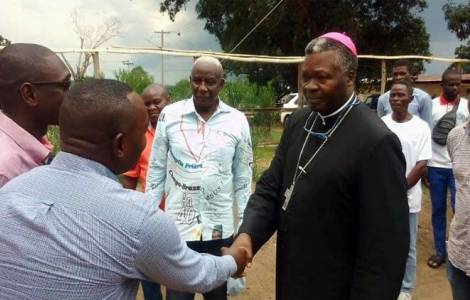 Brazzaville (Agenzia Fides) – More than 2,600 refugees in central-eastern Congo-Brazzaville live in precarious conditions. This was stated by Caritas Congo according to which the conditions of the children in particular are worrying. The refugees come from the province of Maï-Ndombe, in the western part of the Democratic Republic of Congo (DRC), fleeing a land conflict between the Teke and Yaka communities (see Fides, 29/9/2022).
A total of 2,639 have crossed the Congo River from late August-early September to take refuge in the sub-prefecture of Ngabé, in the center-east of the Republic of Congo.
Caritas Congo says that what is worrying are the poor sanitation conditions in which refugees are forced to live, with the risk of spreading epidemics, and the shortage of food, aggravated by the fluctuation in the prices of food from the capital, Brazzaville.
Furthermore, further refugee flows from the province of the DRC cannot be ruled out, where the situation remains very tense.
At least 20 people were killed earlier this week in an attack on Boku village in Kwamouth Territory in Mai-Ndombe province. The clashes between Teke and Yaka, which broke out in June, left at least 180 deaths according to the authorities in Kinshasa and forced several tens of thousands of people to flee to other locations in the DRC or to nearby Congo Brazzaville (Republic of Congo).
The clashes that began in Mai-Ndombe in June then extended to the neighboring province of Kwilu, where an attack on the village of Misia on November 2, left at least 16 dead, according to provincial authorities.
The Congolese National Episcopal Conference (CENCO) DRC has launched an appeal for a peaceful march on Sunday, December 4 to ask for security for the DRC. “The situation is serious. Our country is in danger! Let's not Balkanize the Democratic Republic of the Congo. From north to south, from east to west, as well as in the diaspora, let us all stand up to safeguard the territorial integrity of our country. To this end, we invite Christians and people of good will to fast, to pray, to make gestures of solidarity with the displaced. Furthermore, we invite everyone to march peacefully on Sunday December, 4th”, reads a statement from CENCO published at the end of the Extraordinary Plenary Assembly held in Kinshasa, from 7 to 9 November. While focusing mainly on the east of the country, where various structured guerrilla groups rage, the Congolese Bishops also recall the "worrying security situation that persists in the territories of Kwamouth (Maï-Ndombe) and Bagata (Kwilu)". (L.M.) (Agenzia Fides, 11/11/2022)