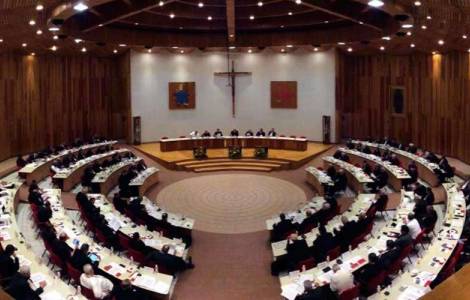 2022-12-17
Ministry of the "missionary" Catechist: criteria and formation itineraries of Episcopal Conferences

2022-12-07
From the first Latin American Church Assembly to the Synod, for a greater capacity for evangelization

2022-12-03
More than 7 million people forced to flee their countries in Latin America: a joint effort by Red Clamor and UNHCR is needed

Buenos Aires (Agenzia Fides) - The plenary assemblies of the Bishops of Argentina, Mexico and Bolivia are being held this week, while that of the Episcopate of Paraguay has just concluded (see Fides, 5/11/2022).
The central themes are the analysis of the social and religious reality of the respective countries, the answers that the Church is called to give in evangelization and the synodal journey.
"The pandemic has not left us a better world, but rather a new pandemic of serious imbalances and ruptures", underlined Monsignor Oscar Ojea, President of the Argentine Episcopate, in the homily of the Mass that he presided over on the first day of work of the assembly, which takes place from November 7 to 11. Bearing in mind that "the deep division in which we live as a society is a source of scandal and is a cause of perplexity for many people", Bishop Ojea highlighted that "the beginning of the synodal process is an attempt that the Church undertakes to build unity in the face of a world full of misunderstandings, to heal the wounds of violence and confrontation". In addition, he insisted on listening as "the beginning of a path of dialogue and encounter", "as a true welcome", a challenge in this time of "deep fractures in the social body". The President of the Argentine Episcopal Conference also wanted to invite everyone to reflect on the request of the disciples to Jesus to increase their faith: "without faith it is impossible to look at and understand reality well", he reiterated, insisting that "faith must be transmitted through our presence, since our closeness is the main evangelizing tool". A faith that helps "perceive how the Holy Spirit guides his Church".
The work of the Assembly, which brings together 96 Bishops from all over the country, as well as 41 emeritus, 2 bishops-elect and the apostolic nuncio - Archbishop Miroslaw Adamczyk, will include an analysis of the socio-cultural reality of the country, to strengthen pastoral accompaniment. The bishops will also discuss the synodal path, with special attention to youth and vocation ministry. Other topics that will be analyzed are the aspects related to the life of the priests and the formation plan of the seminaries, catechists, liturgical texts and economic reform. Finally, a space will be reserved for the work of the Episcopal Commissions.
The bishops of Mexico are also meeting in their Plenary Assembly, from November 7 to 11, which will have as a frame of reference the experiences lived during the national synodal process and its impact on the Church and society. An activity that seeks to ensure the continuity of the Global Pastoral Project, and which will include topics related to the reality of the country such as the reconstruction of the social and ecclesial fabric, the promotion of citizen participation, the construction of peace, the exercise of democracy and the experience of freedom in all its expressions. Among the priorities of the bishops is knowing the proposal that is being built in the Mexican Church through the so-called "Social Dialogues for Peace", which at the moment that the nation is going through, constitute a proposal with a great load of hope.
As for Bolivia, all the bishops of the 18 ecclesiastical jurisdictions of the country are summoned to the Assembly of the Episcopal Conference to be held from November 10 to 15 in Cochabamba. The deputy secretary general of the Bolivian Episcopal Conference, Father Diego Plá, explained that the Assembly will mainly deal with the reality of the country because the bishops "are very concerned." In addition to the social and political situation, issues related to pastoral care and evangelization will be addressed, "so that we can truly be a missionary, outgoing and evangelizing Church, that is present and announces the word of God in the Bolivian reality", emphasizes Father Plá.
The Assembly will also be attended by several speakers who will address the different issues that are being debated, all the support teams of the Bolivian Episcopal Conference, and especially the four areas of evangelization. "First of all, we ask all the people of God to pray that the bishops open themselves to the action of the Holy Spirit, and that the Assembly be a moment in which God is present and acts through the bishops" recommended the Deputy Secretary General. (SL) (Agenzia Fides, 8/11/2022)