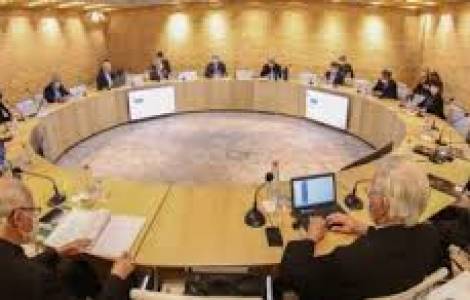 Asuncion (Agenzia Fides) - The "critical state" of the national education system, the situation of the lands and territories of indigenous peoples, the upcoming general elections in April where it is necessary to choose honest people, suitable for the task they will assume and with proven honesty: these are the main issues addressed by the bishops of Paraguay during the Plenary Assembly of the Episcopal Conference, which ended on November 4.
The Assembly, chaired by the first Cardinal in the country's history, Adalberto Martínez Flores, Archbishop of Asuncion, took place "on the path towards a new normal in the post-pandemic era". The Bishops expressed their gratitude "for the life of families who cultivate love, dialogue and solidarity", values important for society, noted "inflation and the difficulty of finding dignified and secure employment", and called for a commitment to the education of new generations. The synodal journey is described as "an immense grace from God", which "shows an image of our Church in full life, with its joys and sorrows, sharing dreams and hopes".
Firstly, the bishops draw attention to "the importance and urgency of an accessible and quality education", considering "the undeniable critical state of the national education system". It is therefore necessary to work for a national educational pact and a comprehensive education that prepares new generations to accompany and guide the current and future path of the country. The National Plan for the Transformation of Education (PNTE) "has generated clashes and created insecurity", underline the bishops, who demand the application of the inalienable values of the Constitution, such as the transcendental dimension, the family, the life and human dignity. The Pastoral of Education of the Episcopal Conference has therefore summoned the country's Catholic educational institutions to a pre-congress on November 7, in order to "launch an analysis and provide proposals on education in Paraguay".
The bishops' message then mentions the question of the lands and territories of the indigenous peoples, a situation that "hurts and is unworthy": "it is not possible to continue to allow the accumulation of so much land in the hands of a few -one and to deprive a large majority of the possibility of dreaming and realizing a dignified life on legally allocated land". This is why "the continuous expulsions of indigenous communities" and the violence of state institutions to carry them out "question us and invite us to reflect on the type of society in which we live". The bishops believe that "the State must maintain a firm and consistent position with regard to indigenous peoples, who have a real and inviolable right, recognized by innumerable laws", while inviting indigenous communities and organizations to defend their rights "by engaging in dialogue with government bodies".
General elections will be held in Paraguay next April, for which the bishops have called for "a culture of the common good, a free and responsible exercise of the right and duty to vote, a healthy and constructive debate on the future of our country". The synodal process highlighted the importance of social dialogue, of the ability to focus on the goals of justice and peace, of walking together, leaving no one behind. Lay Catholics, especially in this Year dedicated to them by the Church of Paraguay, are called to be "leaven of change and transformation in the Church and in society", "passionate militants in the promotion and defense of justice, truth and fraternal coexistence in the society", with a particular focus on the poorest and most vulnerable, seeking to build together "a more humane and more Christian country".
In the final part of the message, the bishops inform that during the assembly they prayed for the abducted and disappeared, sharing the suffering of the families, and invite everyone to participate in the national census, "a very important tool to found and guide future public policies", invoking the blessing of Our Lady of Caacupé for the Paraguayan people. (SL) (Agenzia Fides, 5/11/2022)