AMERICA/BOLIVIA - Bishops and laity: "The government should take its responsibilities and respond urgently to the demands of the population" 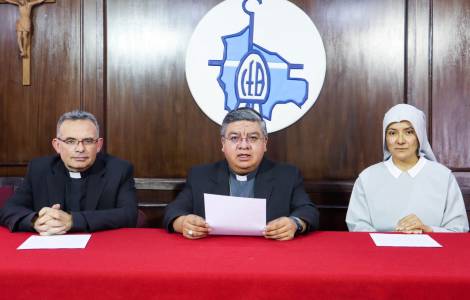 La Paz (Agenzia Fides) - The Secretary General of the Bolivian Episcopal Conference, Monsignor Giovani Arana, yesterday, on behalf of the Permanent Episcopal Council, made an urgent appeal to the government to "assume its responsibilities and seek solutions to the conflicts that afflict the Bolivian people by restoring peace, democratic coexistence and providing an urgent response to the demands of the people".
In the statement, entitled "We are Bolivians", "let us therefore seek what contributes to peace and strengthens us in the faith" (Rm 14,19), the bishops recall "the alarming escalation of violence which is taking place in the country, where human lives are endangered by clashes between Bolivian brothers that arouse resentment and hatred". They then recall the words of Pope Francis in the encyclical "Fratelli Tutti", "love builds bridges", and reaffirm that the current violence that the country is experiencing can have fatal and irreversible consequences.
Since Bolivia is a state of law", the statement recalls, "it is the duty of the government to protect the human rights of all Bolivian citizens and to provide solutions to social problems, respecting the dignity of each Bolivian" and it is also the duty of the authorities to always seek the common good. "The right way to resolve the conflicts that afflict everyone is through dialogue, without double intentions, devoid of particular interests", the Bishops reiterate, and in the case of the Census, "using objective criteria of impartial technicians".
To the parties in conflict they repeat: "An urgent and unconditional dialogue is necessary so that the issues that generate these conflicts, which we unfortunately see spreading dangerously throughout the country, can be resolved effectively, quickly and with fraternal respect".
The region of Santa Cruz, considered the economic engine of the whole country, has been on an indefinite strike for 13 days, to ask the government to carry out the population census in 2023 instead of 2024. The census was to take place this year, but the government announced its postponement to 2024 due to the problems caused by the pandemic. According to the Civic Committee of Santa Cruz, this postponement causes economic damage to the region and political representation in the
upcoming elections (see Fides, 28/10/2022). The strike triggered a series of clashes, sometimes violent, between supporters and opponents, which spread to other cities in Bolivia. Bolivia's civic committees warned yesterday that they would organize a national strike starting next Monday, November 7, if the government of Luis Arce does not bring forward the population census to 2023.
The effects of the protesters' strike and roadblocks are now being felt, especially with the shortage of fuel and food. The Bolivian government has temporarily banned the export of six basic food products due to a "risk of shortage". Víctor Hugo Valda Antelo, Episcopal Delegate for Health of the Archdiocese of Santa Cruz and General Director of the Catholic Hospital, informed that the continuity of care in Catholic hospitals is highly threatened due to the lack of fuel, which prevents the transport of patients and hinders medical and nursing staff, who are making every effort to provide regular care to the sick. He also appealed to the authorities and in particular to the people who prevent the fuel from reaching the pumps: "In the name of the God of life, allow the supply of fuel and the passage of the roadblocks in priority and immediately to the ambulances and hospital transport, as they are essential to continue saving lives".
The Bolivian Council of the Laity has published a manifesto denouncing and protesting against the abuses that are committed in the country, mainly in the city of Santa Cruz de la Sierra. He therefore urges the leaders "to change their attitude, remembering that they were elected to serve the whole of the Bolivian people, to guarantee prosperity, peace and harmony to all the inhabitants".
According to information gathered by Fides, the Bolivian President, Luis Arce, yesterday posted a message on social networks in which he declared that the dialogue to resolve the dispute over the census is still open, and announced the creation of a technical commission to set the final date. The government also said it agreed with the recommendations of the Comisión Interamericana de Derechos Humanos (CIDH) to avoid further violence and start dialogue as soon as possible in order to reach an agreed date for the census. (SL) (Agenzia Fides, 4/11/2022)