ASIA/INDIA - Fight against poverty and hunger in India: between good results and necessary commitments 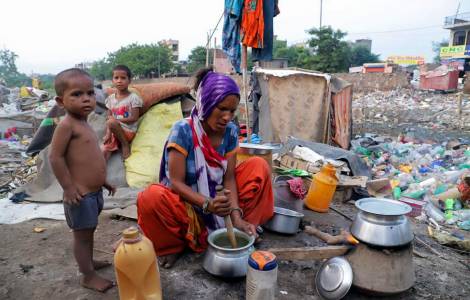 New Delhi (Agenzia Fides) - India has rescued 415 million people from poverty in 15 years. This was stated in the new UN report on the "Multidimensional Poverty Index" (MPI), which analyzes the data collected between 2005 and 2021. The MPI, published jointly by the United Nations Development Program (UNDP) and the Oxford Poverty and Human Development Initiative (OPHI), notes that India continues to have the largest number of people in the world living below the poverty line (228 .9 million), followed by Nigeria (96.7 million), while the South Asian region as a whole, with its 385 million poor, follows sub-Saharan Africa, with 579 million destitute. While noting that, in general, the Covid-19 pandemic has slowed global progress in reducing poverty, the report notes that India as a nation over a period of 15 years, on this path of poverty reduction has obtained positive results.
In India, the report reads, there are 97 million poor children (data from 2021) which means that one in five children (21.8% of the total) suffers from poverty. According to the report, India is the only South Asian country where female-headed households are poorer than male-headed households (19.7% versus 15.9%) while 90% of the country's poor live in rural areas and 10% in urban areas.
Bihar remains the poorest state in the country, while the other 10 poorest states are Jharkhand, Meghalaya, Madhya Pradesh, Uttar Pradesh, Assam, Odisha, Chhattisgarh, Arunachal Pradesh and Rajasthan (West Bengal has dropped out of the top 10). The poor in India remain vulnerable due to rising food and fuel prices, the UN report emphasizes. "Policies that address the current nutrition and energy crises must be a priority. About 18.7% of the entire population of India is vulnerable to poverty.
However, the report also points to India's successes in lifting people out of absolute poverty: among the 415 million people, one group that benefits is children and youth aged 0-17.
"India is an important case study for the UN Sustainable Development Goals, the first of which is to end poverty in all its forms and reduce the percentage of men, women and children in poverty by at least half by 2030", reads the UN Report.
In a scenario that shows some progress but remains dire in absolute terms, the recent "Global Hunger Index 2022" (GHI) ranks India 107th out of 121 countries, the second worst position, after Afghanistan, compared to the rest of the South Asian countries. India's score (index 29.1) places it in the "country with a serious hunger problem" category. The Global Hunger Index is an annual report published jointly by the NGOs "Concern Worldwide" and "Welthungerhilfe", designed to exhaustively monitor hunger in the world in order to implement actions and processes to reduce this situation of hunger. The GHI is based on the values of four indicators: malnutrition, child stunting, wasting and infant mortality.
On the occasion of World Food Day, on October 16, the Food and Agriculture Organization (FAO) announced that the number of people in conditions of food insecurity in the world has increased again, and there are now 828 million people in the world who do not have access to food, as noted in the 2022 report "The State of Food Security and Nutrition in the World".
In this context, various communities of the Catholic Church in India have raised the idea of convening a special "Food Summit" in India, bringing together public and private actors, state institutions, civil society and religious communities, in order to play a more active role in ensuring food for all.
In the diverse and varied regional situations, the Catholic Church in India, with its social and charitable works, tries to offer, in its small way, its contribution to alleviate hunger and poverty. Among its specific nutrition initiatives, the Archdiocese of Calcutta has launched the "Food for All" initiative in collaboration with the AnnBandhu Foundation, a local non-governmental organization. The initiative plans to offer a nutritious meal for six days a week to indigent people, with the broad collaboration of parish communities, religious congregations and Caritas volunteers.
The Catholic community of Calcutta wanted to make a small contribution to food security, that is to say, the possibility that poor people, in the great metropolis of 4.5 million inhabitants, have the certainty of being able to feed themselves every day and not suffer hunger. According to a survey by the "Right to Food" campaign, carried out by 20 Indian civil society organizations among some 3,000 vulnerable households in Calcutta, the food situation remains "critical", with 18.7% of households suffering from hunger and 44% need loans to meet the basic food needs of family members. (PA) (Agenzia Fides, 20/10/2022)