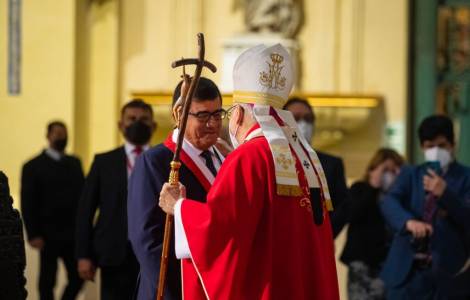 2022-09-23
Bicentennial of the Congress: "Do not abruptly dismiss, without hope, the possibility of building a future together"

2022-09-20
Migrants: we need complete and fair immigration policies, no to xenophobia and discrimination in society

2022-08-31
Month of the Bible: “Let us also share the experience of the disciples on the road to Emmaus”

Lima (Agenzia Fides) - “A few days ago, also from this pulpit, we dedicated a special reflection on the ability to generously build the Homeland. And it is a task that all of us who have a position of responsibility, are expected to live intensely as a service, especially in these times when we see enormous institutional disloyalty, a tendency to use institutions for particular interests and not in favor of the general interest which is the common good of the country". These are the words pronounced by Monsignor Carlos Castillo, Archbishop of Lima and Primate of Peru, during the solemn Mass which he presided over for the Bicentennial of the Congress of the Republic, on September 20, which was attended by the Vice President of the Republic, Dina Boluarte, the President of the Congress of the Republic, José Williams Zapata, ministers, parliamentarians, civil, political and police authorities.
The Archbishop stressed that this situation occurs "not only in State institutions or in various public institutions, it also exists in the Church, it also exists in private institutions where the possibility of building together a future. For this reason, the Holy Father, Francisco, exhorts us to social friendship, to work for the common good and to lay down those things that can prevent it".
Two centuries ago, on September 20, 1822, at 10 am, those elected to form the Congress of the Republic gathered in the Government Palace and from there they went to the Cathedral of Lima to ask for divine assistance through the votive Mass of the Holy Spirit. "That is why we are in a morning of remembrance - the Archbishop underlined -, because remembering is putting a past experience back at the center of our feelings, in the will we exercise and in the orientation that we must live towards the future. That is why, when we also remember those who have left us, especially in this Pandemic, we carry them in our hearts and we want to act in favor of all those who suffer. For this reason, today, we will also sing the Te Deum that was sung that day, September 20, 1822, and the Congress will also meet again to commemorate this event".
Among those elected 200 years ago, there was also Francisco Javier de Luna Pizarro, who on three occasions was elected President of the Constituent Congress and later was Archbishop of Lima, one of the greatest intellectual and political figures in the country's history. Monsignor Castillo cited him in his homily, referring to the role of the representatives of the people and the construction of the Republic.
"Constituting a republic - according to de Luna Pizarro - is a very difficult job: we have to harmonize the heterogeneous elements that make up the political body; conflicting opinions must be agreed upon; combat interests unworthy of protection, which dare to present themselves in the form of public good ... ".
At the end of his homily, the Archbishop of Lima invoked the blessing of the Lord on the congressmen, so that they are united on the fundamental issues, proposing "to think of a common program of fundamental points to be resolved, where we all agree", and all the social and institutional realities, as well as the Church, can collaborate to solve them, especially hunger, which is one of the most serious current realities. "United in elementary things - he concluded -, we can better understand each other in things that have to do directly with the theme and the difficulties of the national leadership".
Since 2016, Peru has been experiencing a political crisis due to the constant instability of leaders and power groups, and consequently of national governments, which has been aggravated by the Covid 19 pandemic with its strong health, economic and social consequences. Those who suffer most from this situation are the poorest and most vulnerable. In this climate, popular protests have not been lacking, with strikes, demonstrations and clashes. The Peruvian Bishops have spoken on several occasions on these issues, launching calls for peace and dialogue, appealing to political leaders to consider the situation and the task entrusted to them with greater responsibility, so that they put aside the selfishness and partisan interests, to fight against corruption, to agree on the necessary political reforms and to take radical measures (see Fides 22/4/2022; 6/4/2022; 4/4/2022). (SL) (Agenzia Fides, 23/9/2022)