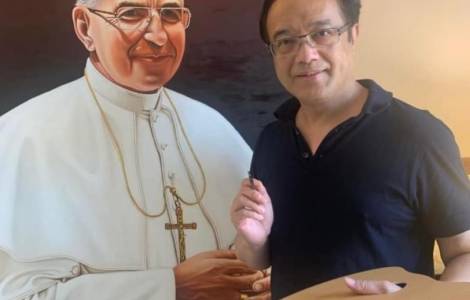 Vatican City (Agenzia Fides) - "As a young man, my uncle wanted to be a missionary in China": This is what Lina Petri, niece of Pope Luciani, confided to Fides, on the eve of the solemn celebration of the beatification of Pope John Paul I, held in St. Peter's Square on September 4, which was also an opportunity to link the "Pope of smiles" with China. The Bible and the cross were a source of inspiration for the internationally renowned artist Zhang Yan, who made the official portrait of the new Blessed. The work was donated by the master to the Giovani Paolo I Vatican Foundation, chaired by Cardinal Secretary of State Pietro Parolin, and by Vice President Stefania Falasca. The portrait was reproduced on the large tapestry that was hung on the facade of St. Peter's Basilica during the beatification liturgy presided over by Pope Francis, and which was unveiled at the time of the proclamation of the new Blessed, before 25 thousand faithful who flocked to the celebration.
Master Zhang had already donated to Pope Francis in 2017 two works that are in the Vatican Museums: "Iron Staff Lama" (1993) and "Cham Dance" (1995).
"It was a challenge and a difficult job", the Chinese artist, born in the province of Sichuan, told Fides. "In reality", explains Master Zhang "it is the first time that I paint a portrait of a Western figure: I have gone from subjects linked to the spirituality of Tibetan Buddhism to a Christian figure, even a Pope. It was a great challenge for me. In addition to carefully studying the history and biography of Pope Luciani, I began to read the Bible, and to know the meaning of the cross. My day of 15 hours of work for two months in a row always started with a reading of the Bible, which is on my bedside table, and with a meditation in front of a cross placed next to the easel. I believe that the Bible and the cross were the sources of inspiration and strength that allowed me to carry out such a demanding and extremely important work. I tried to convey his deep smile, which expressed friendship, welcome, listening".
On the eve of the beatification, Cardinal Pietro Parolin, Vatican Secretary of State confirmed in an interview: "I believe that the agreement on the appointment of bishops in China" will be renewed, signed in 2018 in Beijing by the Holy See and the Chinese Government, specifying that "we have begun to walk on this path, with many difficulties we must admit it, but we will continue walking. I think there will be a long way to go, but we must have patience". (NZ) Agenzia Fides, 19/9/2022)

ASIA/KOREA - Evangelizing through Art, an exhibition of Catholic artists

ASIA/LEBANON - Patriarchs of the Middle East: the "Holy Valley" of Qadisha is the common heritage of all Christians