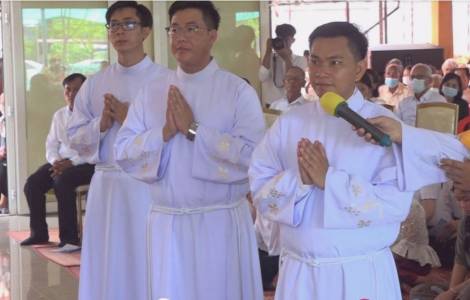 2023-01-31
New students at the Catholic College, which deals with the integral formation of young people

2023-01-05
The Apostolic Vicar of Phom Penh: "Pope Benedict XVI encourages us to continue our mission"

Phnom Penh (Agenzia Fides) - "To give yourself all to God. Give all yourself to others. This is the vocation of the deacon", said Bishop Olivier Schmitthaeusler, Vicar Apostolic of Phnom Penh, expressing "great joy for the whole Church in Cambodia" because "after long years of discernment, formation, prayer of families and of the whole community, we are reaping wonderful fruits: three Cambodian deacons receive the Sacrament of Holy Orders. This is a great grace for our little Church and, God willing, next year our priests".
A large assembly from all over the Vicariate participated in the Eucharist with the rite of diaconal ordination, held in recent days in Phnom Penh, who also greeted Pierre Suon Hangly, a 50-year-old priest from Phanm Penh, who will serve as Prefect Apostolic in the Kompong Cham Apostolic Prefecture. Pierre Suon Hangly is the first local priest who, since the Khmer Rouge, leads one of the ecclesiastical circumscriptions of the small Southeast Asian country.
As reported to Fides, in his address to the three new deacons, John Baptist Samnang Vy, Anthony Ratanak Thai and Paul Kan Ven, Bishop Olivier Schmitthaeusler said: "You three are like the Three Kings and have followed the star, a sign of God, and today you allow yourselves to be sanctified by God and belong to Christ forever through the Sacrament of Holy Orders". Recalling "the family members who have died and prayed so much for you and who are now singing in heaven with the Lord", the Vicar cited Mother Teresa of Calcutta who listened to the Crucifix in her heart which said "I am thirsty". "Jesus thirsts for you and has chosen you to belong entirely to him", he observed. .
"Each of you will be a Servant of God for eternity", he said in his homily. "Service to God is first and foremost a state of the heart, a commitment to God in the personal relationship in prayer, in lectio divina, in adoration, in the prayer of the Church". "Serving God - he continued - is an offering, a sacrifice to the Lord. Not only in the Sacrament of the altar, but to become an offering yourself. Your life is no longer yours, it is a life given to God and to others". "Service according to God is the celebration of a feast in honor of the Eternal: that of the Eucharist to which you are associated in a special way and that of the poor because it is your mission: service to the widow and the orphan", he added, wishing that the three may develop the qualities of the Servant according to the heart of God", who lives the pastoral service with love, with fear, with humility, with fidelity and loyalty, with zeal and with joy, asking God "for grace, wisdom and strength to keep the solemn promises and to serve him every day".
The three new deacons will serve in a local church with 10 Cambodian priests in a church that, after the dark days of the Khmer Rouge regime (1975-1979), thanks to the presence of missionaries, the faith and Catholic communities in the region have flourished again. Today's generation of Christians is considered to be the first Catholic community, as most of their parents and ancestors were killed from mass executions, forced labor, physical abuse, malnutrition and disease in Khmer Rouge labor camps.
In 2001 the first four Cambodians were ordained priests. Last July, the local Church celebrated the priestly ordination of the first young Phnong ethnic group (see Fides, 11/7/2022).
In addition to the Apostolic Vicariate of Phnom Penh, the Catholic Church in Cambodia is divided into the Apostolic Prefecture of Battambang and the Apostolic Prefecture of Kompong-Cham. There are about 20,000 Catholics out of a population of 15 million. (PA) (Agenzia Fides, 17/9/2022)