VATICAN - Pope Francis: in the face of de-Christianization, Saint Augustine is more useful than "modernization" plans 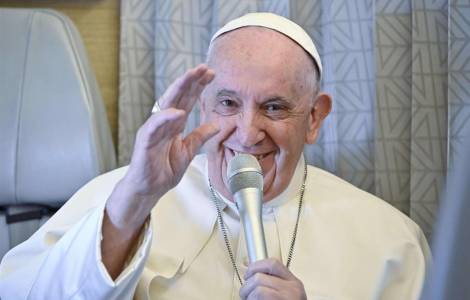 Rome (Agenzia Fides) - Jesus "made the Church with pastors, not with political leaders. He built the Church with ignorant people, the twelve were one more ignorant than the other, and the Church went on". And the shepherds "must go on, but if they have lost the smell of the sheep and the sheep have lost the smell of the shepherds, we can't move forward". Pope Francis said this during the conversation with journalists held on Thursday, September 15,on the flight that from Nur-Sultan brought him back to Rome, at the end of his apostolic visit to Kazakhstan.
To the German journalist who asked him a question about what to do in the face of the processes that in Germany and in many European countries are alienating young people from the Churches, the Bishop of Rome pointed out that "When a Church, whatever it may be, in any country or in any sector, thinks more about money, about development, about pastoral plans and not about pastoral work, and goes that way, it does not attract people". The priority - the Pope remarked - is to be consistent with one's faith and "if you are a bishop or a priest who are not consistent, young people have the nose ... so therefore goodbye!" The Pontiff indirectly responded to all the theories that focus on abstract strategies of "modernization" to restore fruitfulness to the apostolic work and stop the processes of secularization: "Sometimes - the Pope said - we think about how to renew, how to make pastoral care more modern: that’s ok, but as long as it is in the hands of a pastor. If pastoral care is in the hands of the 'scientists' of the pastoral care, who give their opinion here and say what needs to be done there (...). I wonder: is the shepherd in contact, is he close to the flock? Does this flock have a shepherd? The problem is the shepherds".
In his response, the Pontiff also suggested "reading St. Augustine's comment on the shepherds (Speech 46, ed), it takes an hour to read, but it is one of the wisest things that have been written for shepherds and with this you can qualify this or that pastor. It is not a question of modernizing: certainly one must update oneself with methods, this is true, but if the heart of the pastor is missing, no pastoral work will work. None".
During the conversation with the journalists, Pope Francis indirectly responded to those who insist on attributing relativist and syncretistic values to interreligious initiatives and meetings, such as the VII Congress of Leaders of World and Traditional Religions, held in Kazakhstan with the participation of the Pope himself. "Someone" said the Bishop of Rome "criticized and told me: this is fomenting, making relativism grow. No relativism! Each one had his opinion, each one respected the position of the other, but we talked like brothers. Because if there is no dialogue, either there is ignorance or there is war. Better to live as brothers, we have one thing in common, we are all human. Let's live as humans, well educated: what do you think, what do I think? Let's agree, let's talk, let's get to know each other. Many times these misunderstood "religious" wars come from a lack of knowledge. And this is not relativism, I do not renounce my faith if I speak with someone else's, on the contrary. I honor my faith because someone else listens to it and I listen to his".
During his conversation with journalists, the Pontiff also referred to the ongoing dialogue process between the Holy See and the People's Republic of China. "There is a Vatican-Chinese bilateral commission that is going well, slowly" the Pope replied, "because the Chinese pace is slow, they have an eternity to follow: they are a people of infinite patience". The Pope also referred to the past experiences of the "Italian missionaries who went there and were respected as scientists", also pointing to the example of the "many priests or believers who have been called by the Chinese university because this gives value to culture", reiterating that the dialogue commission between Beijing and the Holy See "is going well, Cardinal Parolin chairs it and is the man who knows the most about China and Chinese dialogue at this time". (GV) (Agenzia Fides, 16/9/2022)