ASIA/KAZAKHSTAN - Fr. Trezzani: "Being few is neither a fault nor a handicap: mission is the work of the Other" 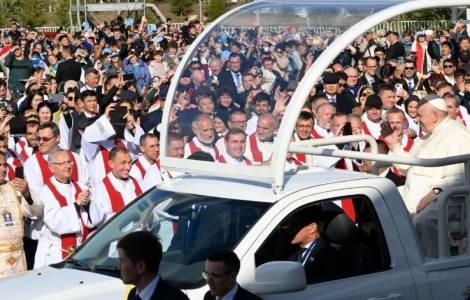 2022-12-07
A new Center for children with Down syndrome in Almaty, the result of "constructive dialogue" between the Church and civil institutions

Almaty (Agenzia Fides) – Fr. Guido Trezzani, 67, an Italian missionary in Kazakhstan for more than 26 years, said he was "very happy, still under a beneficial spiritual shock", at the end of Pope Francis' visit to the Central Asian country. Founder of the "Ark Village" which, near Almaty, a city in Southeast Kazakhstan, welcomes disabled and orphaned children, Fr. Trezzani has lived in Kazakhstan for 26 years, during which he has been able to observe and experience the changes in the political, social, religious and ecclesial scenario, starting from the early years of the post - Soviet era. Today also Director of Caritas, at the conclusion of the Pope's Apostolic Journey (September, 13-15), he confides to Fides: "The Pope, especially in his address to Bishops and religious, but in various passages of his presence among us, moved by the Holy Spirit, spoke words that shed light on our reality, our efforts, errors, and give us a direction to follow. I can say that the whole Catholic community has received from this apostolic journey, by the grace of God, much more than expected".
The first words that Father Trezzani wishes to emphasize are those concerning the "little flock": "We are few, we are little but, the Pope recalled, this is not a disadvantage, a handicap, it is a different perspective. This condition reminds us that we are not self-sufficient, as Fr. Ruslan, the priest who gave his testimony, also said. Being little is not a 'defect', it is not a fault. It is not numbers that save us and the Church. On the contrary, living our faith and our vocation serenely in this condition, which is our reality, is liberating: all the work we do, our mission, does not depend on us but is the work of the Other, it is the work of God. So do not complain because we are few or little. Our strength is in Christ, let us give way to Him who acts".
A second aspect mentioned by Pope Francis that is relevant to the Catholic community in Pakistan, according to the missionary, "is the fact that we are not administrators of the sacred or policemen enforcing religious norms: this is a clear indication, because it speaks to some of our pastoral approaches where the joy of the Gospel doesn't come through. We should keep these words well in mind, because we live this temptation, to become teachers who give rules, rather than passing on the ultimate reason that moves our choices, that is, to bear the face of the Other, who is Christ Jesus. Like the apostles, we are people who are sent. We experience it every day in welcoming children with Down syndrome and with disabilities, as we witness the amazement of people, whether atheists or Muslims, in seeing people, our volunteers, who look at them or look at their children with that love with which no one has ever looked at them. And this is not a personal virtue of ours, but means that we are channels through which the loving gaze of God is directed upon every creature."
In the community of the faithful in Kazakhstan, Francis' sentence "No one is a stranger in the Church" finds a particular resonance, notes Father Trezzani, explaining: "Traditionally and even today, the Catholic community in Kazakhstan identifies itself with the various national communities: the Polish Church, the German Church, etc. Thus the Kazakhs, who regard the Church as a national peculiarity, see it as distant and not belonging to them. Only slowly, gradually and laboriously, do they disengage from this cultural and pastoral classification". Hence the appeal to "novelty", that is "not to remain prisoners of patterns, sterile rites and traditions, but should reconsider the tension between memory and the future: the richness of the memory of the martyrs, the people who suffered in the Soviet camps is neither a museum nor a boast. Because it is not a sterile memory, it must be relived in our present, now that we are experiencing the grace of being free, to work and to profess the faith", the missionary said, who is also the director of Caritas.
A final pronouncement of the Pope touched the hearts of the Kazakh faithful, as Father Trezzani points out: "The Pope invited us to be leaven in dough, seed in the ground, to witness the happy and sad events of society, to serve it from within. We are called to walk with the people, alongside the people, stepping out of the sacristies. Charity is the language and the means to go out of every ghetto. Let us go out and be witnesses of the gospel of peace and unity, that we must build together with others. We are called to listen to other cultures, religions and communities in order to build together the good and - as the motto of the papal trip says - to be heralds of unity and peace at the heart of our reality". The Catholic Church in Kazakhstan has 125,000 baptized out of 18 million inhabitants. (PA) (Agenzia Fides, 16/9/2022)