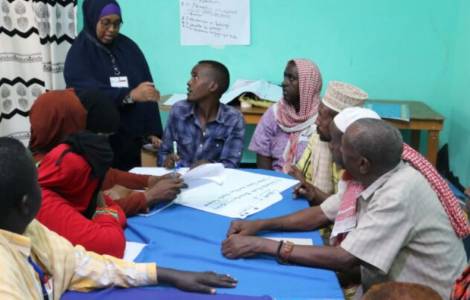 2022-06-13
Conflict of cultures, drought emergency and insecurity among the main challenges of the new government

Mogadishu (Agenzia Fides) - "At the moment the new Somali government is showing good will and it seems that the political process is beginning to work if we take into account that the lower house last Saturday, August 6, unanimously gave the green light to the executive presented by Hamza Abdi Barre, the new Prime Minister of Somalia. This is certainly a great success, especially considering how many divisions there were in Somalia until a few months ago." Monsignor Giorgio Bertin, Apostolic Administrator of Mogadishu and Bishop of Djibouti, comments to Agenzia Fides on the new direction in the troubled country of the Horn of Africa that began after the presidential elections last May that gave victory to Hassan Sheikh Mohamud.
The elections had been postponed several times and it was feared that the compromise between the political parties to hold them would never come. The elections in May, therefore, raised hopes among observers that the country, caught in the grip of many problems to be addressed, will finally be able to turn the page.
Msgr. Bertin: "One of our delegations, joined by Msgr. Camilleri, the apostolic nuncio in Addis Ababa, spent four days in Mogadishu and we were able to meet Adan Madobe, the new president of the chamber, with whom we discussed confessional relations. The main objective of the visit was to address the very serious problem of the drought, but it was an opportunity to restart ties with the Somali authorities. We are satisfied. We were unable to meet with the Minister of Religious Affairs, Muktar Robow, as he had not yet been officially appointed at the time of our visit, but Robow recently received our Somali intermediary and said that he was open to future meetings. Also on those days we met with the person responsible for the response to the drought and we talked with him about this dramatic aspect and how to work together to face it. The Apostolic Nuncio also presented various gifts, including the letter signed by the Pope in Abu Dhabi with the Sheikh of Al Azhar and the encyclical 'Fratelli Tutti'.
Therefore, it was an opportunity to establish a first contact. In addition, like Caritas Somalia, on Saturday, August 6, we made a donation for a health center that will be managed by local staff".
There are many pending issues on the new executive's agenda. One of the main ones is the constant penetration of al-Shabab, the well-known Islamic terrorist group, which has been present in the territory for a long time, causing great tensions. "In the different meetings we had with the politicians, it seemed to us that there was a good will to dialogue with everyone, even with the historical opponents of al-Shabab. Robow's choice is interesting, as he was a prominent member of al-Shabab, a group from which he distanced himself. He is a Minister who knows the mechanisms of the Islamic group from the inside and can help along the way to try to reach some kind of agreement. Clearly it will not be easy, but it is an attempt. The government seems to want to start a dialogue also with the different state entities that are part of the Federal Republic. One of the endemic problems in Somalia has been the tension between the centripetal tendency of Mogadishu and the centrifugal one of the various regional entities. Now there seems to be a more structured dialogue. The dramatic situation due to famine, with half the population dying of hunger, requires an effective search for collaboration as soon as possible".
The Church, always present in Somalia and active mainly on the humanitarian level, is dedicated to the path of dialogue that could open up new geopolitical scenarios: "On the diplomatic level - notes Msgr. Bertin - we can say that we were not very present; on the humanitarian level, however, the Church has always been present. The Nuncio was very happy with the results of the meetings. At the moment, as is well known, there are no diplomatic relations, but after 30 years, for the first time we meet with representatives at the highest level. It is the desire of the Nuncio and the authorities to deepen relations for mutual recognition. It would be a very positive event for everyone, from a geopolitical point of view, because it would mean an important step to be recognized and supported by the international community. Therefore, there must be a high level of respect for rights and differences, beginning with religious ones. The relationship with the Catholic Church is fundamental and we hope that we will be granted the right to worship. It would be a big step forward. In fact, this right is not guaranteed because, given the general insecurity of recent years, we cannot rebuild the cathedral or hold public worship. Given the fragility of the government, it could be a risk for the executive to grant openings towards the Church that could be judged excessive, at least at this stage. In the meantime, we will remain close to the Somali people. For this reason, we want to launch an aid campaign in collaboration with Caritas Somalia, Caritas Ireland and Caritas USA, to provide an immediate response to drought and famine". (LA) (Agenzia Fides, 13/8/2022)