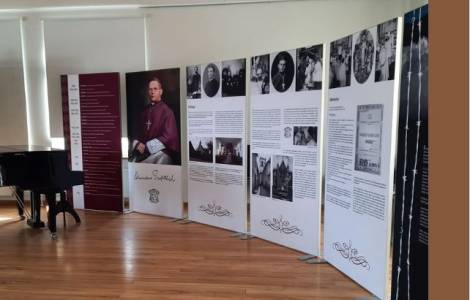 2022-08-13
An exhibition dedicated to the cultural and pastoral commitment of Archbishop Profittlich, builder of the local Church and martyr

Tallinn (Agenzia Fides) - "We would like to make the story of the Servant of God Eduard Profittlich SJ and of the Catholic Church in Estonia better known, especially to the new generations". Thus Marge-Marie Paas, diocesan postulator for the cause of beatification of the Jesuit and external collaborator of Father Pascual Cebollada SJ, general postulator of the Society of Jesus in the Congregation for the Causes of Saints, comments with Agenzia Fides on the inauguration of the exhibition dedicated to Archbishop Profittlich, held on August 8 at the Ministry of Foreign Affairs of the Republic of Estonia, in the presence of the Minister of Foreign Affairs Urmas Reinsalu and the Catholic bishop residing in Tallinn, Monsignor Philippe Jourdan, Apostolic Administrator of Estonia.
This is the fourth stage of this traveling exhibition after those held in the Saint Peter and Saint Paul Cathedral in Tallinn, in the Catholic School in Tartu and in the Estonian Parliament. Born into a peasant family in a town in the south of the German Empire, Eduard Profittlich entered the Society of Jesus at the age of 23 in the Netherlands, since the Jesuits had already been banished from the territories of the Second Reich.
Appointed Apostolic Administrator of Estonia by Pius XI on May 5, 1931, his vocation coincided with the refounding and reorganization of the Catholic Church in Estonia. His commitment in the cultural and pastoral field, in constant dialogue not only with the small local group of Catholics, but also with members of the other Christian denominations present in Estonia, led him to be close to both the intelligentsia of the Baltic republic and the most humble. As proof of the total dedication with which he carried out the tasks entrusted to him by the Holy See, in 1935 he applied for and obtained Estonian citizenship. With his consecration as Archbishop in 1936 and the choice not to abandon his chair during the Soviet invasion of June 1940, despite having had the opportunity to escape, he chose to link his fate to that of the Estonian people. Soviet religious persecution did not spare the Archbishop of Tallinn: arrested in June 1941, he was deported to Kirov, a Russian city some 950 km from Moscow, where he died in prison in 1942.
The exhibition on the occasion of the eighty years of his martyrdom is also part of the celebrations of the first centenary of the diplomatic recognition of the Republic of Estonia by the Holy See, which took place de facto in 1919 and de iure in 1921. The exhibition, curated by Dr. Paas, was made possible thanks to funds from Renovabis, an aid organization for Eastern Europe of the Catholic Church in Germany, Bonifatiuswerk, a charity created to support Catholics in the GDR, and the collaboration of some volunteers. The exhibition has already proven to be a beautiful place to share unique stories. In fact, many visitors spoke to those present about episodes related to personal or family life from those years in which freedom of expression and faith was constantly threatened.
"The exhibition opened the hearts of many. It is important to commemorate the life of a Servant of God through conferences, articles and initiatives like this one, to help spread the story of his martyrdom and, thus, encourage recognition of his holiness", continues Dr. Paas. It is this heritage of stories of sacrifice and fidelity to the Catholic Church during the nearly fifty years of Soviet occupation, such as the story of Eduard Profittlich SJ himself, and make them known to young Estonians today. Currently, the Catholic community in Estonia is very small, it is made up of about 6,000 faithful, that is, 0.5% of the total population. Eduard Profittlich is the first Estonian priest on his way to beatification. (CD) (Agenzia Fides, 13/8/2022)