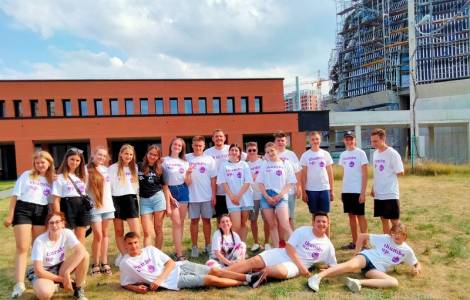 Lviv (Agenzia Fides) - "In recent months, especially since May 8, almost all the refugees we hosted here, in the monastery and at Casa Cafarnao, have returned to their towns and cities (also in Kharkiv) or have reached Italy or other places abroad. To this day we still host two families, one from Kharkiv and the second from Dnipro, for a total of 8 people". This is what Fr. Moreno Cattelan, a priest of Don Orione's Little Work of Divine Providence, from Lviv reported who gave us an update of the local situation.
"Even trips to Italy have become a rarity - continues the Orionine priest -. The last two, organized by us directly, date back to May 8, when about fifteen people reached Milan, and the last, for 10 people, organized on June 21 in collaboration with the Associazione Comunità Papa Giovanni XXIII, as part of Operation Colomba. Some of the almost 700 people we helped reach Italy have returned to their homeland. Others are organizing the return trip". The eight disabled children who had been guests of the Mater Dei Center in Tortona since March have also returned to Ukraine. They arrived in L’viv, in the "Casa Cafarnao", on the night of Wednesday, July 20, after a long journey that was certainly less troubled than the one that took them to Tortona on the evening of March 2, when the war had just broken out. In recent months the children have spent their stay in Tortona with great serenity, welcomed and cared for by the Orionine charismatic family and by many associations and shopkeepers who have always had great attention and willingness to donate time, energy and resources for all of them.
"In these days - says Fr. Cattelan - despite the difficulties of the moment, the cleric Mykhailo Kostiv managed to organize a week of summer activities for the children. The first week, from July, 4 to 8, a hundred young people took part, due to the restrictions imposed by the situation, led by 22 very young animators. Given the success and requests from parents, children and teenagers, a second week was proposed, from July, 18 to 23. On Monday, July 11, the first day of registration, we already had 85 reservations. Registration closed the evening of the following day. Among the 100 or more registered, about thirty were refugees. The experience was important for everyone, young and old, to relive a time of normality despite the fact that death, destruction, bombing and fighting are still underway with extreme brutality. Our service, which began the day after the invasion, continues with new methods and people in the name of welcoming everyone".
"The war continues, fear looms, the future is still marked by black clouds - concludes Fr. Cattelan - but no one can deny us the right to build, where others destroy or to spend a few days in joy and fraternity, playing, singing, running and above all having fun. On these two fronts we will always be present". (SL) (Agenzia Fides, 23/7/2022)