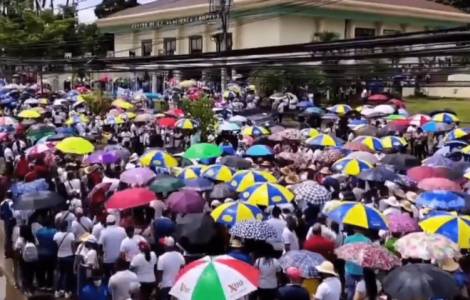 2022-09-19
The Bishops announce the second phase of the dialogue, a new step in the fight against inequality, social exclusion and corruption

2022-07-30
Dialogue continues, tension has decreased, the Church does not exclude anyone

2022-07-11
Bishops’ appeal: "All committed to strengthening the unity and stability of the family, so that it can fulfill its mission"

Panama (Agenzia Fides) - "The Catholic Church accepts the call to mediate in the face of the situation in the country": this was communicated by the Archbishop of Panama, Monsignor José Domingo Ulloa, through a video message. According to information from Agenzia Fides, Panama has been paralyzed by a strike for 8 days that, after being started by teachers, has spread to other sectors of society, including students and natives. The reason for the protest is the exorbitant increase in the prices of basic necessities, such as medicines, electricity and, above all, fuel. The price increases set by the government were necessary to curb inflation. The protests have included marches and demonstrations, which in some cases have led to clashes with the police.
The Archbishop underlines that, given the call made by the Executive "to act as a bridge to find a way out - inclusive and participatory - to the situation in the country", the Church "accepts the invitation to be mediators in the construction of necessary consensus for peaceful coexistence". Monsignor Ulloa has asked "all those summoned to this dialogue to give us an opportunity to make the appropriate decisions for the common good".
"The people deserve honesty, coherence and respect from everyone, without rigid positions or preconditions that prevent dialogue", he underlined, affirming that they will count on the contribution of mediation experts that the Church has in the Pastoral Social Caritas and Santa María la Antigua Catholic University. "We entrust to Santa María la Antigua, the good Mother and patron saint of Panama, this dialogue so that it is not a discussion or a debate of ideas, but rather a vehicle for the search for the common good", he said in conclusion.
At the end of their first plenary assembly of the year, held from January 10 to 14, the Panamanian bishops had highlighted the problems of society: division, polarization, misinformation, injustice, corruption, drug trafficking, violence... For this reason, they asked the institutions to regain the trust of the population by putting the person and the common good at the center, through a renewal process that involves all realities (see Fides, 17/1/2022).
Just a few days ago (see Fides, 11/7/2022), at the end of their second Assembly, the Bishops once again highlighted their concern for the social situation. Respecting the right to social protest, they affirmed, "we must all work in search of a better country, even more so now that we are coming out of the Covid 19 pandemic" that has left tears and pain, as well as economic and educational consequences for young people. In addition, they called on the national government, social organizations, all men and women of good will "so that together we seek appropriate solutions to the historical moment in which we live as a people", to build a country "guided by just, equitable and sustainable human development for all its citizens". (SL) (Agenzia Fides, 14/7/2022)