ASIA/SYRIA - The Apostolic Administrator of Aleppo: "war is not 'right': it's just war" 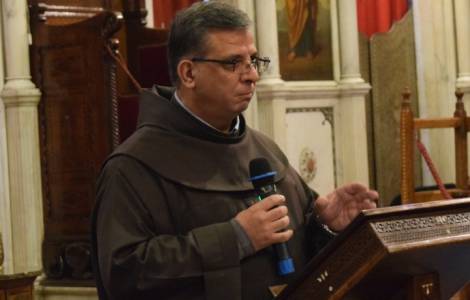 Aleppo (Agenzia Fides) - "I look at the women and children forced to leave their homes due to the war in Ukraine, and I see the millions of displaced persons and refugees of our Syrian people. The same thing happened to us. Now we must look only to them and do everything possible to alleviate their suffering, without getting lost in disputes over just or not just wars". Thus, from Syria, Father Raimondo Girgis, friar minor of the Custody of the Holy Land, looks at the terrible consequences of the latest conflict that broke out in the heart of Europe.
Since June 29, Pope Francis has appointed him apostolic administrator "vacant see" of the Apostolic Vicariate of Aleppo of the Latins. The gutted neighborhoods of today's Ukrainian cities recall the devastation that still tears the urban fabric of the Syrian metropolis, a legacy of the conflict that bled Syria to death for 10 years. His observation point is considerations on wars and pitfalls that upset global geopolitical scenarios.
Also in Syria - confirms Father Raimondo - there are heavy and direct repercussions from the ongoing conflict in Ukraine, which are added to the devastating effects already recorded in the daily lives of millions of Syrians due to Western sanctions against the government of Damascus and the pandemic crisis. "Many Christian and Muslim families make a tremendous effort to face the most primary needs of everyday life. They look to the future with increasing anguish. There is no electricity, petrol, medicine. After the war ended, they dreamed of recovering, and now, with the conflict in Ukraine, the horizon has closed again. Aid also appears to be decreasing. With the new tragedies looming, even the international community seems to have forgotten the Syrian people". Putin's Russia has played a crucial role in conditioning the fate of the Syrian conflict. But Father Girgis does not want to enter into political issues on the responsibilities and causes of the conflict that devastates Ukraine: "we have no clear opinion on the distribution of blame regarding what is happening in Europe and in other conflicts around the world. We are always, a priori, on the side of peace.
This is our language as disciples of Christ, this is what is important to us. The whole world needs peace, and to see wars end". An urgency that according to Father Girgis cannot be circumvented with sophisms and manipulative arguments. To those who say that in order for peace and justice to prevail, the use of weapons must be increased to overthrow regimes, the Franciscan priest reminds us that "salvation cannot come from weapons, which are always used to kill someone". And to those who try to justify their strategies by resorting to the formulas of the "just war" or even the "holy war", the Apostolic Administrator of the martyr city of Aleppo replies that it is useless to play with the definitions of just war or unjust war, because "war is war, that's all. War causes death and pain". In this scenario Father Raimondo tells Fides that the Syrian Catholic communities are experiencing in recent months the season of summer meetings and camping with boys and girls, to share together opportunities for spiritual comfort, asking may grace guard the faith and hope of the baptized in these difficult times.
Father Raimondo Girgis was born in Damascus in 1967. He received the Franciscan habit in Santa Maria degli Angeli (Assisi, Italy) on August 25, 1988. In October 1992 he made his solemn profession, and was ordained a priest after completing his theological studies at the Studium Theologicum Jerosolimitanum on July 23, 1993, in Latakia (Syria). Father raimondo then obtained a license and a doctorate in Eastern Canon Law at the Pontifical Oriental Institute. He also published his doctoral work in Italian, dedicated to “Mixed marriages in the particular situations of the Catholic Patriarchal Churches in Syria, Lebanon, Jordan and Egypt” (2002). In the magazine Collectanea Orientalia he also published a juridical study on the married clergy in the ancient legislation of the Eastern Churches.
On June 29, the day on which Father Girgis was appointed Apostolic Administrator Sede vacande of Aleppo, Pope Francis also accepted the resignation from the pastoral care of the Apostolic Vicariate of Aleppo of the Latins presented by Bishop George Abou Khazen O.F.M. (GV) (Agenzia Fides, 8/7/2022)