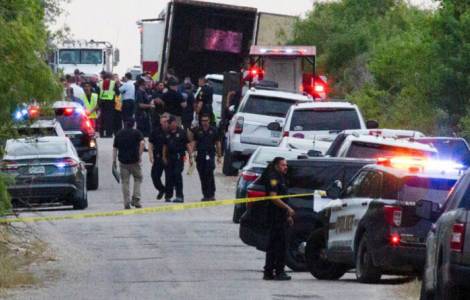 Bogotà (Agenzia Fides) - "We reject punitive approaches and the 'struggle' against irregular migrants in the formulation of migration and border management policies, not only because of their inefficiency and high financial costs, but above all because they result in more death and slavery (trafficking), and go against the basic sense of humanity and the spirit of a broad 'we' that Pope Francis calls us to develop ". This is what the Archbishop of Trujillo and president of CELAM, Monsignor Miguel Cabrejos Vidarte, writes on behalf of the Bishops of Latin America and the Caribbean and the organizations working with migrants who form the Red Clamor, after the discovery of a truck with 50 dead migrants inside, many of them minors, from Guatemala, Honduras and Mexico. The bodies were discovered in an abandoned vehicle in San Antonio, a town in Texas about 240 km from the Mexican border, in an area of the United States where temperatures easily exceed 40 degrees. The June 29 statement expresses dismay at the incident and solidarity with the families of the deceased migrants. "This criminal act, like so many others that occur with increasing frequency at the borders of developed countries, highlights the despair of those who, in search of a better future, are willing to put their lives and their families at risk", the letter continues, noting that tougher migration policies are failing to stem the flow of migrants and are a direct cause of deaths and increased human trafficking.
"The life of no human being can become a commodity, endowed with a market price, to enrich criminal mafias, not sometimes in complicity with the security organs of our countries", strongly denounces the letter. The Archbishop then expresses his concern for the fate of survivors, especially children, given the precedents of what is happening with migrant children in the United States. CELAM and Red Clamor therefore call on all countries in the region, and in particular the US government, to expand regular migration options in order to prevent death, human trafficking and smuggling.
The statement refers to another similar tragic episode that occurred a few days ago, on Friday June 24, in Europe, when groups of sub-Saharan migrants trying to escape misery, hunger and wars in their different countries and having no other possibility to enter Spain in a safe and regulated way, tried to cross the border between Nador (Morocco) and Melilla (Spain). "The arrival of more than 1,500 people was repelled by the security forces of Morocco and Spain, causing an authentic massacre, with more than 30 dead", denounces Red Clamor in its press release of June 28. The media and social networks showed "bodies thrown on the ground, some alive and some dead, under the sun, tied up, suffering cruel, inhuman and degrading treatment by the Moroccan army". Red Clamor shares the request of the Spanish Bishops to the government to examine and address this new crisis in line with the protection of every human being and the urgent establishment of legal and safe access routes for people in forced mobility. Red Clamor expresses its solidarity with the families of the murdered brothers and demands "justice, truth, investigation, reparation and non-repetition of these bloody events", as well as the release of the migrants detained in the CIEs (Centers for Identification and Expulsion ) because "they are victims and as victims they need a safe environment and human support, not a prison". It also calls for the repatriation of the bodies of migrants who died in their country.
Joining its voice to that of the Pastors of the Latin American continent and the Caribbean, Red Clamor concludes: "With Pope Francis, we continue to bet on the tearing down of walls and the construction of bridges of solidarity, on combating the culture of rejection, to make possible the social friendship and fraternity of the sons and daughters of God, without excluding anyone, regardless of skin color, nationality or migratory status". (SL) (Agenzia Fides, 30/6/2022)

AMERICA/COLOMBIA - Inauguration of the new CELAM headquarters, intended "to work and serve the evangelization of all the peoples of Latin America and the Caribbean"

AMERICA - Extraordinary assembly of CELAM in July: evaluation of the pastoral journey of the Church in Latin America and the Caribbean