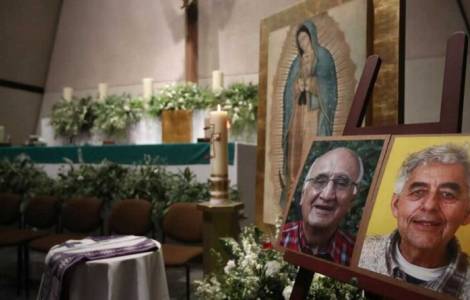 Mexico City (Agenzia Fides) - "The recent murder of a civilian and two Jesuit priests inside the Catholic church of Cerocahui, in the Tarahumara region of Chihuahua, is just another example of the lack of values and sensitivity which has been reached, losing all respect for human dignity. Official data tells us of almost 122,000 murders at the hands of criminals during the three and a half years. How many murders in Mexico!" The Bishops of Mexico write this in their "Message for Peace" in which they address the People of Mexico "with deep concern for the growing violence suffered by our beloved Country and with great sadness for the loss of thousands of innocent lives". With pain they show that "crime has spread everywhere, disrupting the daily life of the entire society", reaching "levels of inhuman cruelty in executions and massacres that have made our country one of the most insecure and violent places in the world". The bishops recognize that "as a Church we have not done enough in the evangelization of peoples and it is necessary to redouble our efforts", in the reconstruction of the social fabric and in pastoral work. "We reaffirm our commitment to building peace, therefore, we ask all the People of God, especially priests, men and women religious, catechists, evangelizers and other pastoral workers, to join in the work to carry out the Peace project of Christ".
After expressing their closeness and solidarity with all the victims of violence, the Bishops join the thousands of citizens of good will who are asking for an end to this situation. "We cannot be indifferent or oblivious to what is affecting us all." They address the Federal Government and the different levels of authorities: it is time to review the security strategies that are failing". It is time to listen to citizens, to the relatives of the victims, to the police forces mistreated by the crime, to the academics and researchers, to the denunciations of the media, to all the political forces, to the civil society and religious associations. "We believe that it is not useful to deny reality and neither to blame past times for what we have to solve now – they continue -. Listening to us does not make anyone weak, on the contrary, it strengthens us as a Nation". United with the People of Mexico, of which they are a part, the bishops respectfully ask the political authorities "to convene a national dialogue to undertake intelligent and comprehensive actions in order to achieve peace through joint participation". "Peace is possible, and it must be possible" they conclude, highlighting that "in this task all citizens of good will can be allies. Let's not miss this opportunity!". Meanwhile, the bodies of the two priests and the third person, the tour guide Pedro Palma, killed on June 20 by gunmen inside the church of Cerocahui, have been recovered. After the triple murder, the group had taken the bodies (see Fides, 22/6/2022). The president of Mexico, Andrés Manuel López Obrador, sent a large contingent of soldiers to the mountainous area of the state of Chihuahua, considered one of the most dangerous in Mexico, to capture the perpetrator of the crime. The police believe it is José Noriel Portillo Gil, aka "El Chueco", head of the local cell of the Sinaloa drug cartel. The Chihuahua State Attorney General has offered a reward to anyone who provides information that could lead to his capture. At the end of the general audience on Wednesday, June 22, Pope Francis also expressed his closeness to the tragic events in Chihuahua: "I also express my pain and dismay at the murder in Mexico, the day before yesterday, of two Jesuit religious, my brothers, and of a layman How many murders in Mexico! I am close with affection and prayer to the Catholic community affected by this tragedy. Once again, I repeat that violence does not solve problems, but rather increases unnecessary suffering".
The presidency of the Latin American Episcopal Council (CELAM) expressed dismay at the crime in a message of solidarity: "Let us accompany with our prayers the Church of Mexico in this hour of affliction, and in a special way our brothers of the Society of Jesus who, like so many priests, missionaries and members of religious life, remain faithful to their mission, despite the threats against their integrity, accompanying the communities, assisting them, celebrating the faith and watching over their lives until the last consequences, following the example of our Lord Jesus Christ, who gave his life on the cross for our salvation".
Denouncing the multiple forms of violence affecting that region of the continent, CELAM urges the authorities to carry out rapid investigations to bring those responsible to justice, and to guarantee the safety of the local community. Finally, he invites not to lose hope in the face of these tragic events, invoking the intercession of "the numerous martyrs of Latin America and the Caribbean who shed their blood for love of God, the poor and the defense of Creation". (SL) (Agenzia Fides, 24/6/2022)