AFRICA/NIGER - Forgotten crises: "The time of the African martyrs is not over yet" 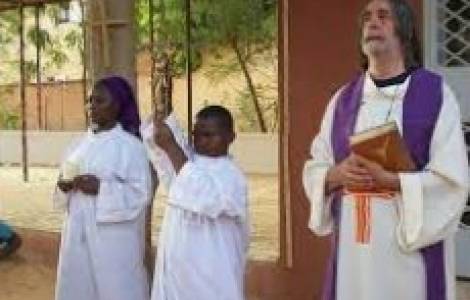 Niamey (Agenzia Fides) - A few days before the massacre of the Catholics in the small Nigerian town of Owo (see Fides, 6/6/2022), the Norwegian Refugee Council (NCR) published its annual list of the ten forgotten crises in the world. For the first time since the report was published, the ten crises are all in Africa. The Democratic Republic of the Congo is at the top, followed by Burkina Faso, Cameroon, South Sudan, Chad, Mali, Sudan, Nigeria, Burundi and Ethiopia. Commenting on the report, Father Mauro Armanino, priest of the Society for Africa Missions, explains: "The faithful had just celebrated Pentecost and were listening to the passage that describes the descent of the Spirit in the form of tongues of fire on those present. The step from Fire of spirit to fire of weapons was short, dramatically short. One Fire and other fires, one of life and the other of death. Dozens of people fell victim to the fires, not the first nor the last in Nigeria, which for years has been sliding into the abyss of armed violence, corruption and the suspected and possible complicity of some politicians". In this context, the missionary working in Niamey (Niger) points out that "a list of the armed attacks in Nigeria would be pedantic and the list of the dead, which unfortunately has to be updated daily, is endlessly long. Already in 2020, a local NGO compiled a list of Christians killed in the first six months of the year: 1202 killed by Peuls (traditional shepherds) and Boko Haram/Iswap (Islamic State in West Africa province) activists. These attacks took place mainly in southern Kaduna The NGO concerned notes that these attacks are being repeated with the complicity of the Nigerian government". Father Armanino explains that although Christians are not the only victims of this war, they make up a significant part of it. "For example, last month in the north of the country homes were burned and shops looted because they were accused of blasphemy. In Benue state, dozens of parishioners who left the church died and we remember the stoning of a schoolgirl in Sokoto for blasphemy. Later the church in Sokoto was burned down and the bishop threatened with death in the following days". "In order to understand the facts, one must place them in the historical, economic and political context of the country", stresses Father Armanino. The division created between the North and the South, the choice of Islamic law (Sharia) granted to various northern states and above all the great corruption of the military who, maneuvered by politicians, put themselves at the service of those who pay them. Impunity reigns and the words of condemnation of President M. Buhari's last ' Fire' sound predictable and ultimately empty". "From the Fires of Pentecost - he concludes - to the fires of weapons the distance was minimal, a few meters, but between the two there is an abyss, which only the Cross of Resurrection can help to cross. The time of the African martyrs is not over yet". (MA/AP) (Agenzia Fides, 8/6/2022)