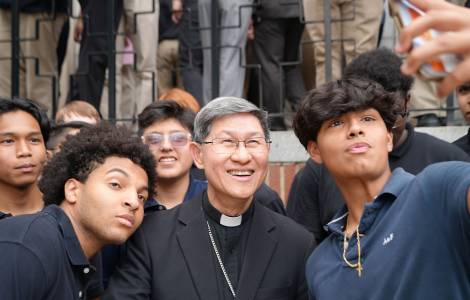 New York (Agenzia Fides) - Prayer, meetings and pastoral closeness. These are the traits that marked the visit of Cardinal Luis Antonio Tagle, Prefect of the Congregation for the Evangelization of Peoples, to the National Direction of the Pontifical Mission Societies (PMS) in the United States. Cardinal Tagle, expressed his gratitude for their commitment to the mission of the Church and encouraged the U.S. PMS to continue along the path they have undertaken. "The readings today console us - said the Prefect of the Congregation for the Evangelization of Peoples in a homily at morning mass which was also attended by the Directors of the PMS of the dioceses of Trenton and Paterson, both Filipinos -.
Jesus prayed for His disciples as He prays now for us. His prayer was that we be one, and the unity of us as disciples has a missionary dimension: That they may believe that You sent Me, Jesus says". Then Cardinal Tagle blessed a photograph of Blessed Pauline Marie Jaricot, foundress of the first of the Pope’s mission societies, the Society for the Propagation of the Faith (see Fides, 23/5/2022) present in the PMS offices and then continued his day with two meetings organized by the Director of the U.S. PMS, Monsignor Kieran Harrington.
There were two meetings in two different, but very significant places in the district of Queens, respectively Elmhurst hospital, once the epicenter of COVID-19 in the United States, and to the only remaining U.S. high school seminary, Cathedral Preparatory School and Seminary, also in Queens.
At Elmhurst Hospital, Cardinal Tagle told staff who gathered to meet him, both in the hospital’s conference room and through a virtual Town Hall, "You were the hands of God" and added: "Use your talents, your skills, but always continue to come to the sick as a brother, a sister, as family. That will be a source of consolation".
During his visit, Cardinal Tagle anointed an adult patient on one floor, and a newborn in the Neonatal Intensive Care Unit (NICU), and also prayed with parents in the NICU.
Following the hospital visit, there was a brief stop nearby at Cathedral Preparatory School and Seminary. Founded in 1914, the high school is the minor seminary for the Diocese of Brooklyn, and today welcomes young men from neighboring Rockville Centre Diocese and the New York Archdiocese. About 120 Freshmen, Sophomores and Juniors gathered on the steps of the school outside, singing the Salve Regina as Cardinal Tagle placed flowers near a statue of the Blessed Mother and prayed. (E.G.) (Agenzia Fides, 7/6/2022)

VATICAN - Pope Francis to Filipino migrants in Rome: you are "smugglers of faith"