ASIA/SOUTH KOREA - Communicating peace in the digital world: the "Signis" World Congress is being prepared 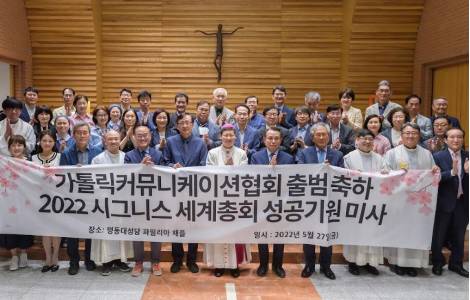 Seoul (Agenzia Fides) - Communication is mission. The proclamation of the Gospel is a form of communication which, in today's cultural context, also takes place through mass media and social media. This was explained by Msgr. Peter Chung Soon-taick, Archbishop of Seoul, while presiding over a Mass during which the "SIGNIS World Congress 2022" was announced, which will be held from August 15 to 19 in Seoul. As Fides learned, during the Mass held in recent days in the family chapel of Myeondong Cathedral, the Archbishop said: "The media are a precious gift from God and I believe that all communicators are people who have been called by God for special purposes. I invite you to work with a prayerful heart so that you may find comfort and grace in the presence of the Lord. I hope you will all do your best so that the media can lead our society in the direction of Gospel values". The Archbishop recalled the commitment of the Archdiocese of Seoul in the field of communication, with the creation of the Communications Committee, which took place in October 2017. The initiative was launched by Cardinal Andrew Yeom Soo-jung, Archbishop emeritus of Seoul, with the idea of coordinating and disseminating the Gospel effectively through cooperation between the various communication channels of the Archdiocese, such as newspapers, television and radio, the publishing house and the web portal of the Archdiocese.
During the Eucharist, concelebrated by four diocesan priests active in the Ministry of Communication of the Archdiocese of Seoul, the recent merger of three South Korean Catholic journalists' organizations was announced: "The Catholic Journalists Council of Korea" , "Korea Catholic Journalists and Publishers Association" and "Signis Korea" merged into a single new organization called "Korea Catholic Communicators Association - SIGNIS Korea". The mass was attended by about fifty members of the organizing committee of the "SIGNIS World Congress 2022", journalists, broadcasters and members of Catholic publishers. The SIGNIS World Congress, which is held every four years, will take place from August 15 to 19, 2022 at Sogang University in Seoul and will have the theme "Peace in the Digital World". It will include two special programs, the "Global Journalists' Forum" and the "International Youth Forum". Due to the improving pandemic situation, the scheduled meetings will be held in attendance, but will be broadcast live worldwide on YouTube and simultaneously in cyberspace on the Metaverso platform. SIGNIS is an organization of Catholic journalists and communicators from around the world, recognized by the Holy See, which has more than 100 member organizations worldwide. (PA) (Agenzia Fides, 3/6/2022)