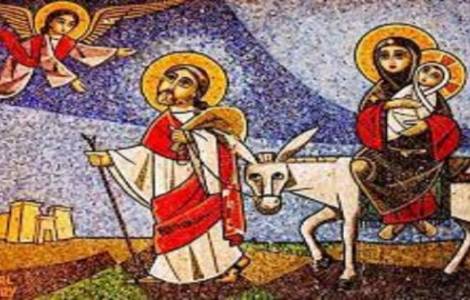 Sakhā (Agenzia Fides) - People who follow Jesus consecrate their family to the Lord, so that he protects them from the dangers of the present time, and preserves their path in love, sharing and freedom. This is how Coptic Orthodox Patriarch Tawadros II indicated the practice of entrusting oneself to Christ and the Virgin Mary as a privileged way of living the daily routine of family life, which is scattered with big and small trials for everyone. Pope Tawadros expressed various considerations about what can help family life in the afflictions and difficulties that can dissipate unity and cohesion between spouses and between parents and children, yesterday afternoon, Tuesday, May 31, on the eve of the day when the Coptic Church celebrates the entry of the Holy Family into Egypt. The Patriarch spent the eve of the feast at the Martyr Demiana Monastery, in the Governorate of Sacre l Sheikh, in the Nile Delta, together with bishops, priests, deacons, laity and the nuns of the monastery. Today, Wednesday, June 1, the Patriarch will preside over the celebrations for the feast of the Holy Family's entry into Egypt at the Church of the Blessed Virgin Mary in Sakhā. In 2021, on the occasion of the same feast, the Coptic Orthodox Patriarch recalled that the journey and stay of the Holy Family in Egypt are forever "a blessing" and a source of pride for the Egyptian nation and people. Therefore, on that occasion, Pope Tawadros expressed his wish that the day on which the Egyptian Churches commemorate this event, recorded in the Gospels, be recognized as a national holiday for all Egyptians.
For years, the Egyptian authorities have promoted the so-called "Way of the Holy Family", a major project to open to international pilgrimages the itinerary that links the places traveled, according to ancient traditions, by Mary, Joseph and the Child Jesus during their stay on Egyptian land, when the Holy Family was forced to emigrate from Palestine to escape the evil designs of Herod. The "Way of the Holy Family", as Fides Agency has already reported on several occasions (see Fides, 5/1/2021), unites 25 places dear to the memory of Egyptian Christians, winding along an itinerary of 3,500 kilometers, which crosses 11 Governorates, from the Nile delta to Upper Egypt. On October 4, 2017 (see Fides, 5/10/2017) Pope Francis, in the context of the Wednesday General Audience, greeted a large Egyptian delegation that had come to Rome to promote pilgrimages throughout the "Way of the Holy Family" in collaboration with the Opera Romana Pellegrinaggi, an institution of the Vicariate of Rome, organ of the Holy See, which reports directly to the Vicar of the Pope, Cardinal Angelo De Donatis. (GV) (Agenzia Fides, 1/6/2022)