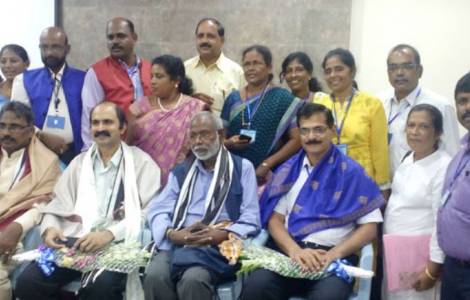 New Delhi (Agenzia Fides) - Act promptly to stop the targeted hatred and violence against religious minorities, especially Christians and Muslims in India: this is what the "All India Catholic Union" (AICU) asks of the Prime Minister of the Indian Union, saying it was "deeply troubled by the hatred against religious minorities which in recent months has erupted like so many volcanoes in the sea of religious harmony in India". The AICU has written to the federal government and to the governments of the various states of the Federation, calling for urgent measures to be taken to put an end to the campaign of hatred and persecution that is raging in the nation's territory.
In a note sent to Agenzia Fides by the organization of the Indian Catholic laity, born over 100 years ago, Lancy D'Cunha, national president of AICU states: "If it is not controlled now, hatred could cause incalculable damage to national peace".
"We have gone far beyond polarization through the so-called 'Laws on freedom of religion' which criminalize interfaith marriages under the pretext of curbing conversions by force or deception", notes D'Cunha.
The AICU recalls the most recent and serious episodes of violence in the states of Uttar Pradesh, Karnataka and Haryana, where thugs, militants and local political leaders have terrorized communities of religious minorities (Christians and Muslims), clergy and institutions .
"Over the centuries ancient civilizations such as India have overcome epochs of violence to become leaders of peace and development", observes the President. "We must learn from the mistakes made by other nations, which have ruined their economies and their social fabric and have brought them to the brink", D'Cunha said.
"Political and religious leaders must act together to strengthen peace and friendship. They cannot take their eyes off their responsibilities. The Catholic Union is committed to working for peace, harmony between religious and social groups and the integrity and progress of our country", he added. AICU, along with other Christian groups, has already challenged the discriminatory laws before the Supreme Court which deny Christian Dalits the protection of the constitutional provisions granted to Dalits who profess the Hindu, Sikh and Buddhist religion.
AICU, along with other religious groups and civil society movements, reports that it will file legal appeals against anti-conversion laws that go against the letter and spirit of the Constitution and trigger targeted violence.
Established 103 years ago as an organism of the Catholic laity, AICU has seen the nation face challenges such as the partition between Pakistan and India in 1947, violence against Sikhs in 1984, bloodshed and clashes between Hindus and Muslims after the demolition of the Babri mosque in 1992. In all these situations it made his voice heard by proclaiming evangelical values such as dialogue, tolerance, peace, justice, religious social harmony, protection of the common good. (SD/PA) (Agenzia Fides, 25/5/2022)

AMERICA/PARAGUAY - Archbishop Martinez Flores to the laity: "Go to the suburbs and announce the good news"

ASIA/HONG KONG - The laity, committed to being the engine of evangelization and participation in the synodal process