AFRICA/NIGER - The Church of Niger needs effective support: the missionaries are present despite the current insecurity 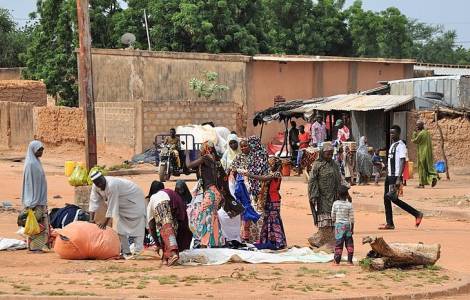 Dosso (Agenzia Fides) - - "To bear witness to our missionary charism in the diocese of Niamey through the study of local languages and cultures, to facilitate Islamic-Christian dialogue, to take care of the poorest and to practice a spirituality attentive to these objectives represent pastoral style typical of the Society of African Missions (SMA)", writes to Agenzia Fides Fr. Rafael Casamayor, SMA, following the recent Benin-Niger provincial assemblies. "We are convinced that the SMA has its place here in Niger, continues the missionary, and especially in these difficult times! We maintain our presence in the country despite the current insecurity. The Church of Niger today needs effective support. Today we are the only priests in the diocese outside the city of Niamey." The SMA has been present in Niger since the beginning of its evangelization. Niamey Cathedral celebrated the 90th anniversary of its foundation by the SMA Fathers. "We are currently present in the missions of Gaya and Dosso", writes Father Mauro Armanino (SMA) in his report on Niger where he discusses current socio-political events, the role of the Church in the poorest country of the planet, commitment and missionary dreams. "In Gaya, the youth ministry stands out for the large number of Beninese students in health training schools, assistance to the city prison, malnourished children and the training of minors in Catholic schools, carried out with the Oblates Catechistes Petites Servantes des Pauvres (OCPSP). In Dosso, Father Armanino continues, after several changes of priests, with Father Rafael and René, a seminarian, we are trying to "re-establish" relations and reorganize the communities of base (CCB). We take care of blind children, we work for an Islamic-Christian dialogue. Very dynamic young priests take care of one of the oldest communities in the country, with 75 years of presence." In Niamey, Father Mauro takes care of the house of the SMA of Niger and the reception of the companions, follows the pastoral care of migrants and the center of Christian formation as well as the community of Saint Monica. Witnessing in difficult times, the need to train and empower the laity in their governance for greater effectiveness, and the threats that loom, are among the themes discussed at the last SMA Diocesan Assemblies and help to depict what the Church is experiencing in the Country. "Niger is threatened by innumerable conflicts," reads Father Rafael's note. Malnutrition, diseases, recurring famines, climatic disasters: floods, drought, 300,000 internal migrants due to jihadist attacks on the borders with Burkina Faso, Mali, Libya and Nigeria". "We remember the churches burned on January 16/17, 2015 in Zinder and Niamey. The scars remain. Sometimes the lack of trust between Christians and Muslims manifests itself in interpersonal relations. The pastor of Dolbel, shot, and the kidnapping of Father Pierluigi Maccalli in September 2018 had a profound effect on the Church in Niger. In this context, the local Church is committed, despite its fragility, to working and fighting in education, which is exemplary, and in the practice of charity." (RC/AP) (Agenzia Fides, 24/5/2022)