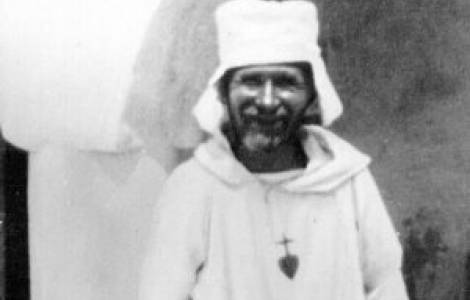 Algiers (Agenzia Fides) - Charles de Foucauld is not just an icon. Because if his story continues to touch the hearts of a multitude of people in all parts of the world, it is not because of the romantic image of a "hermit lost in the desert sands". Rather, what predominates is the grateful amazement at the many "conversions" that have marked a life of following the Lord, up to the gift of recognizing oneself as a "universal brother", embedded in an experience of brotherhood "offered to all, regardless of religious, ethnic or national affiliation". With these words, Archbishop Jean-Paul Vesco of Algiers pays homage to the fruitful testimony of the French monk, who lived a large part of his incomparable spiritual adventure in Algeria, ahead of his forthcoming canonization on May 15 in Rome.
"Charles de Foucauld was killed by a bandit on December 1, 1916 in Tamanrasset, in the center of the Ahaggar massif, in the deep south of Algeria, stresses the Archbishop of Algiers in his contribution published on the website of the Catholic Church of Algeria, " His death helped create the icon of a 'hermit lost in the desert sands', an image that does not do justice to the truth of his unique and universal destiny".
Over time - Archbishop Vesco notes - a "more beautiful and humane image of Charles de Foucauld's personality" has emerged, which surpasses the static character of an "icon".
De Foucauld's testimony is said to be a journey marked by "successive conversions", a succession of new beginnings that marked the life of the future saint, orphaned at the age of five. This testimony - the Archbishop emphasizes - "still speaks from the heart of many people. It is part of Charles de Foucauld's Christian journey that on June 9, 1901, in the chapel of the Seminary of Viviers, a choice that shows "his missionary zeal and his to go out to reach those furthest from the proclamation of the Gospel, to the borders of the French Sahara at that time". At the culmination of his existential and spiritual journey, in his unique confession of faith made among the peoples of the region", continues the Archbishop of Algiers, "Charles discovered men and women, certainly unknown to the good French of his time, but rooted in a tradition, a religion and a culture for which he was passionate to the point of sacrificing hours and hours of prayer", and to the point of establishing with them "the relationship of otherness and reciprocity typical of friendship". It was then, and only then", notes Jean-Paul Vesco, "when Charles became the universal brother he wanted so badly to be." And his "fraternal union, which he offered to all, regardless of religious, ethnic or national affiliation, is the mark of the brotherhood of Christ's disciples".
In the final part of his speech, Archbishop Vesco places the story of Charles de Foucauld alongside that of other witnesses to the faith who have been assassinated in Algeria and France in more recent times: "Like other great witnesses, such as the monks of Tibhirine or Bishop Pierre Claverie, the death of Charles de Foucauld was not intentionally sought, and has no value in itself. It highlights the culmination of a life whose whose immense fruitfulness Charles, the universal brother, could not imagine. Also the death of Father Jacques Hamel says nothing in itself except that his murderers were blinded. Rather, it highlights the beauty and fidelity of a life lived to the end by a humble priest in the footsteps of his Lord". (GV) (Agenzia Fides, 28/4/2022)