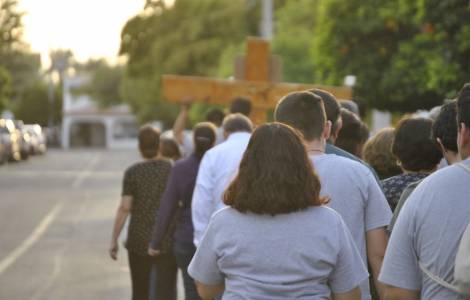 Concepción (Agenzia Fides) - The Chilean Church organized a Conference on Church-State Relations that was held through digital platforms, in which, among others, Monsignor Fernando Chomali, Archbishop of Concepción, and Monsignor Juan Ignacio González, Bishop of St. Bernard participated. In the statement sent to Fides, it is highlighted that, at the beginning of the meeting, Monsignor González presented the historical context of the Church-State relationship, underlining the importance of the Church as a guide and active agent in the review of political decisions that govern the lives of Chileans. Therefore, Monsignor Chomali invited politicians to take up the values, concepts and common good promoted by the Catholic Church in Chile, through continuous work to build a just society that prioritizes the dignity of each person. Among the questions asked by those who followed the meeting, one of them concerned the participation of Catholics in political activities.
Archbishop Chomali replied: "It is completely compatible to be Catholic and to participate in political life", adding that one should not ignore what one professes in relation to involvement in political parties, for Catholics must be vigilant about what the Church promotes. Another question concerned the intervention of Christian principles in today's society, and what is considered "politically correct". Monsignor Juan Ignacio González emphasized in his response,
"We must go with good teaching, and with freedom, to propose these principles", referring to the tireless work of being a "Church that goes forth". He also mentioned the importance of putting Christ at the center of life, as Pope Francis said, because that is how we will achieve a constructive society at the service of others. March 11 saw the official inauguration as President of Chile of the young Gabriel Boric, 36, student leader of the October 2019 protests, who won the December 19, 2021 ballot and intends to radically reform the socio-political structure of Chile in a progressive sense. As tradition dictates, the following day, March 12, an ecumenical and inter-religious prayer took place in the Cathedral of Santiago in the presence of the highest authorities of the State. The previous days, the President had called a meeting with representatives of the different religious denominations present in Chile (see Fides, 11/3/2022; 14/3/2022). (SL) (Agenzia Fides, 8/4/2022)