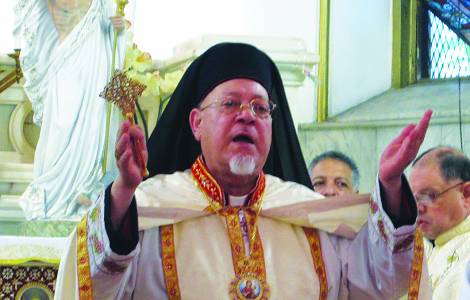 2022-05-31
Celebrations in the Marian shrine Jabal al Tayr: around one million pilgrims expected

Cairo (Agenzia Fides) - "He was a good pastor for all of us. And for me also a father. He ordained me a priest, and I was the first to receive episcopal ordination from him, in June 1978, when he had been bishop for a few months". This is how Anba Antonios Aziz Mina, Coptic Catholic Bishop Emeritus of Guizeh, remembers with emotion the figure of the Egyptian Cardinal Antonios Naguib, Patriarch Emeritus of the Coptic Catholic Church, who died on the night of March 27 to 28, at the age of 87. "He had just celebrated his birthday a few days ago, on March 18", Anba Antonios Aziz Mina told Agenzia Fides "and that day, I managed to hear him for the last time on the phone, to wish him a happy birthday . Today, although saddened by his death, I thank the Lord for the gift of having walked by his side during a good part of my journey. Antonios Naguib's death took place at the Italian Hospital in Cairo, where the Egyptian Cardinal and Patriarch had been admitted to the intensive care unit due to his worsening state of health. The first information circulating on the cause of death refers to the worsening of kidney failure from which the emeritus patriarch had suffered for some time. The personal story of Antonios Naguib mingles with the journey of the Coptic Catholic Church (an ecclesial community to which approximately 250,000 baptized belong) and other Christian communities - starting with the predominantly Coptic Orthodox Church - during the last decades of Egyptian history, rich in moments of trouble. Born in 1935 in Samalut, in the province of Minya, he studied at the inter-ritual seminary of Maadi, in Cairo, then in Rome, at the Pontifical Urbaniana University. Ordained a priest in 1960, after obtaining a degree in theology and Sacred Scripture, he contributed with a group of Coptic Orthodox and Protestant theologians to the preparation of an Arabic translation of the Bible. He became Coptic Catholic Bishop of Minya in September 1977 and worked diligently to promote pastoral and catechetical activities in the diocese. He was elected Patriarch of Alexandria of the Catholic Copts on March 30, 2006, after his predecessor Stephanos II Ghattas retired for reasons of age and health. As Patriarch, Antonios Naguib received the "Ecclesiastica Communio" from Pope Benedict XVI on April 7, 2006. In October 2010, the Pontiff appointed him General Rapporteur of the Special Assembly for the Middle East of the Synod of Bishops. Created cardinal by Benedict XVI during the Consistory of November 20, 2010, Antonios Naguib resigned as patriarch in January 2013 due to health problems, but he participated in the Conclave of March 2013, which elected Pope Francis. The pastoral foresight and aptitude for spiritual discernment of Antonios Naguib were also manifested during the troubled years experienced by Egypt and its Christian communities between 2010 and 2013. This period was also marked by the beginning of the so-called "Arab Spring", which saw the ousting of President Hosni Mubarak and then the season of government led by the Muslim Brotherhood. This period was indelibly marked by the massacre of Christians in the Coptic Orthodox Church of Saints in Alexandria, Egypt, on December 31, 2010. In an interview with "30 Days" magazine in January 2011, Patriarch Naguib mentioned this tragic event, in particular "the hypothesis, circulating in particular among Christians, according to which the Minister of the Interior (of the government still responsible to President Mubarak, ed) had planned the massacre in Alexandria, to justify a strengthening of police controls". In the same interview, Patriarch Naguib outlined in suggestive detail the spiritual ties of the Catholic Copts with the brothers of the Coptic Orthodox Church. "We Catholic Copts", noted the Egyptian cardinal among other things "distinguish between an ascetic-monastic spiritual heritage and a theological-dogmatic heritage. While for them theology coincides with Sacred Scripture, the Fathers of the Church and the rich monastic spiritual tradition. Everything therefore remains identical at the beginning; there is not that differentiation that we see in the Catholic Church over the centuries. And I must say that for us, Coptic Catholics, the proximity of this reality to our Coptic Orthodox brothers is a help, because our "Western" formation carries a risk of intellectualism. Whereas with them, everything is much simpler and more essential. The point that unites us all is the liturgy. We must say that the faith in Egypt was preserved and transmitted, not because of the theology, civil culture or great preachers, but because of the visceral attachment to the liturgy felt by Christians with us. The liturgy is our true spiritual homeland". In the same interview, Patriarch Naguib also expressed clear judgments with regard to geopolitical campaigns and mobilizations that take as a pretext the sufferings and tribulations of Christian communities: "As Christians of Egypt", underlined the Egyptian Cardinal, "we see that any call for diplomatic pressure, punitive initiatives or economic sanctions against Egypt for events that concern Egyptian Christians, is the most serious prejudice that can be done to Christians themselves". (GV) (Agenzia Fides, 28/3/2022)