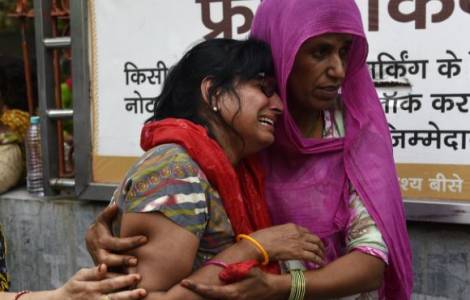 Bijapur (Agenzia Fides) - A 50-year-old Protestant Christian Pastor was murdered by a group of masked men in the district of Bijapur, in the Indian state of Chhattisgarh. The episode of violence, which took place on March 17, has only now been confirmed to Agenzia Fides. According to sources in the local Christian community, Pastor Yallam Shankar was having dinner at his home, around 7:00 pm on March 17, when a crowd of militants forced entry, dragged him out and stabbed him with a sharp weapon.
The attack took place while the Hindu festival of "Holika Dahan" (a festival that celebrates the victory of good over evil) was being celebrated in the village of Angampalli, where pastor Shankar lived.
Before starting to lead the small local Christian community, Pastor Shankar had served as head of the village council, where he had distinguished himself as an advocate for the rights of Christian minorities and helped those who suffered abuses and violations of rights to seek justice. Because of this commitment, Pastor Shankar had received several life threats, as well as the request, always rejected, to abandon Christianity and accept conversion to Hinduism.
On March 18, the day after the lynching, a report was registered at the Madded Police Station, a necessary step for the police to begin an investigation. For now, the police have not released any official communiqué, however there are several theories on the reason for the murder of the Pastor.
According to reports to Fides, a leaflet was found at the crime scene that seems to link the murder to the People's Liberation Guerrilla Army (PLGA), a Maoist armed group that rages in the area. The leaflet accuses Pastor Shankar of being a police informant and announces the murder because he did not heed the warnings from the PLGA.
The police, however, deny that Shankar was an informant and are examining the hypothesis of the misdirection. On the other hand, the local clergy and members of the Christian community in the area believe that, despite the note, it is not clear whether the attack was really carried out by Maoists or whether other elements with ideas that promote violence against Christians are involved.
In a statement sent to Fides, the organization "Christian Solidarity Worldwide", which monitors violence against Christians in the world, states: "Yallam Shankar was a man who served his village defending the rights of minorities and defending justice. Chhattisgarh is increasingly becoming a breeding ground for targeted attacks against Christians and the authorities' efforts to stop this violence have so far proved insufficient. We urge the authorities in Chhattisgarh to conduct a swift and thorough investigation into this murder and to bring the perpetrators to justice for their actions".
According to data collected by the "United Christian Forum" "in 2021 almost 500 cases of anti-Christian violence were reported in India", recalls to Fides A.C. Michael, Catholic lay leader and UCF coordinator.
According to Michael, this is the tip of the iceberg, because "numerous cases of attacks against Christians are not reported and are not documented". (PA) (Agenzia Fides, 28/3/2022)