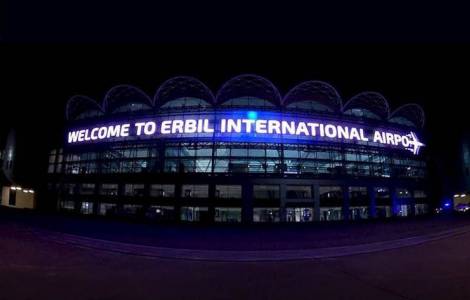 Erbil (Agenzia Fides) - The Chaldean Patriarchate deplores the launch of missiles that on Sunday, March 13, sowed terror among the population of Erbil and, in the light of this serious episode, calls on the political forces to overcome the impasse and the cross vetoes which, in Iraq, have for months prevented the formation of a new government, weakening the country and exposing it to destabilization operations promoted by external forces. The concerns of the Chaldean Patriarchate regarding the current uncertain political phase in Iraq were expressed in a statement signed by Patriarch Louis Raphael Sako, and published through the official channels of the Chaldean Patriarchate after the launch of missiles which fell on the capital of the autonomous region of Iraqi Kurdistan. At 1 a.m. on Sunday March 13, 12 Iranian-made Fatih-110 ballistic missiles were fired at the US base near Erbil airport. The recently constructed building that houses the United States Consulate in Iraqi Kurdistan is also located near the affected area. As Omid Khoshnaw, the current governor of Erbil, also confirmed to the media, the missile launch caused no casualties or injuries, only material damage. The headquarters of the local television channel Kurdistan24 was also damaged. The missile attack was claimed by the Iranian Revolutionary Guard Corps. In their message of demand, the Pasdaran refer to the presence of a "secret Israeli military delegation" on the American base concerned. After the claim, the authorities in Baghdad summoned the Iranian ambassador to express their official protest about the attack, while two of the most important Iraqi parties, the electoral alliance "Saeroun" (which belongs to the Shiite leader Muqtada al Sadr) and the Democratic Party of Kurdistan, asked for the formation of a commission of inquiry to confirm or invalidate the presumed presence of Israeli teams in Erbil. The Erbil attack also confirms, in its own way, the chronic politico-institutional weakness of the Land of the Two Rivers, always permeable to terrorist actions or incursions organized or carried out on Iraqi territory by military and intelligence apparatuses linked to foreign forces. Faced with this situation, the Chaldean Patriarchate reaffirms that the country's problems can only be solved through dialogue between political and social forces, "in order to ensure a better future for all, and not through destructive weapons". In the current critical circumstances, the Chaldean Patriarchate urges all Iraqis to "close ranks and join forces to achieve the formation of a national government capable of assuming all its responsibilities, in order to preserve the security of the country from all negative fallout, especially now that Iraq's relations with many countries, especially neighboring countries, have started to improve and there is hope that further steps can be taken in this direction".
In Iraq, the ethnic-confessional division of institutional functions requires that the Head of State be chosen from Kurdish political representatives, while the speaker of parliament must be a Sunni and the prime minister a Shiite. The legislative elections of October 10, 2021 saw a clear affirmation of the electoral alliance led by the Shiite leader Muqtada al Sadr, who now occupies 73 of the 329 seats available in parliament. On the other hand, the parliamentary weight of pro-Iranian Shiite parties was reduced, and they strongly contested the results. So far, it has not been possible to form a new government or elect a new President. (GV) (Agenzia Fides, 14/3/2022)