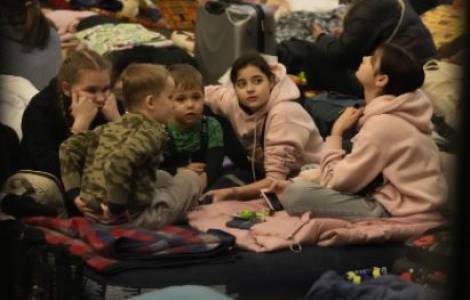 2022-03-21
Resignation of the Bishop of Cheongju and appointment

Seoul (Agenzia Fides) - Welcoming and echoing Pope Francis' call for prayer and fasting for peace in Ukraine, Archbishop Peter Chung Soon-Taick, OCD, Archbishop of Seoul and Apostolic Administrator of Pyongyang, has sent a letter to the Ukrainian Church expressing an ardent desire for peace and full support and solidarity with the suffering population. The text of the letter, sent to Fides by the Communications Office of the Archdiocese of Seoul, is as follows: "People around the world who desire peace, including myself, feel deep shame for the current situation in Ukraine, for the impact of war on civilians, especially children, women and the elderly. In particular, I am heartbroken to see Ukrainian children gathered in a metro station, shivering from the cold and fear. This video has simply shown how dangerous and terrifying war is. Since a prolonged conflict is likely to cause further damage to the citizens of Ukraine, the Catholic Church and the faithful in Korea sincerely pray that it ends as soon as possible and that peace returns quickly". The Archbishop urges the entire community of Seoul to respond to Pope Francis' call by promoting local initiatives of fasting and prayer for peace, and entrusts all the Ukrainian people to the protection and intercession of the Blessed Virgin Mary.
Cardinal Andrew Soo-jung Yeom, Archbishop Emeritus of Seoul, also expressed his concern and his closeness to the suffering people of Ukraine. "Whenever I met the Bishops of Eastern Europe (Bosnia and Herzegovina, Croatia, Serbia and Slovenia), we often talked about Europe's path to peace and the urgent resolution of differences and I am saddened that so many people are suffering because of the invasion, and I pray with all my heart that God will grant peace to Ukraine".
Cardinal Yeom reports that the "Nicholas Cardinal Cheong Missionary Support Foundation", of which the Cardinal is the supervisor, has arranged to donate US $ 50,000 in emergency aid to the Ukrainian Church. Father Matthias Young-yup Hur, spokesman of the Archdiocese of Seoul and Chairman of the Foundation, stressed that "it is God's providence that the first activity of the Foundation is to send a fund to help Ukraine". The donation, he reports, "will be delivered to the Ukrainian Catholic Church as soon as possible and is intended to provide support, especially to children and the elderly". The Archdiocese of Seoul, and the entire Korean Church, he concludes, "will continue to pray for the peace in Ukraine, while various ways and means will be sought to support the Ukrainian people". (PA) (Agenzia Fides, 11/3/2022)