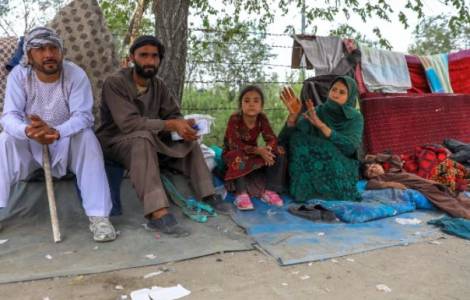 Sydney (Agenzia Fides) - "The scale of the humanitarian crisis in Afghanistan requires the urgent creation of additional places in Australia’s humanitarian intake. This is why the Bishops, together with other members of the Catholic Alliance for People Seeking Asylum (CAPSA ) and many other groups and organizations, once again call on the government to welcome at least another 20,000 people, in addition to the 15,000 already foreseen". This is the appeal launched by the Bishop of Parramatta, Msgr. Vincent Long Van Nguyen, OFM Conv, president of the Commission for Social Justice, Mission and Service within the Bishops' Conference of Australia. The Australian Catholic Bishops expressly call on the country's institutions to commit themselves to guaranteeing hospitality for a greater number of Afghan refugees, in a national effort of solidarity.
The appeal, sent to Fides, was launched after the federal government announced its intention to give asylum, in the next four years, to 15,000 people fleeing Afghanistan, especially among those who had collaborated within the Australian humanitarians programs. Msgr. Long Van Nguyen defined the choice as positive, but not sufficient: "This government initiative represents good news, but it has limits, because the places provided are only available for family reunification or pre-existing humanitarian visas. We need to scale up our practical compassion, not simply adjust priorities within existing plans". The announcement of the reception measure was given in recent days by Federal Minister of Immigration Alex Hawke, who specified how the government would open the doors to Afghans with links with Australia: for example, former local employees are involved or workers of Australian non-governmental organizations, as well as women and ethnic or social minorities. The news came shortly after the release of a report by the Senate Committee on Foreign Affairs, Defense and Commerce that the Australian government failed to support thousands of
other Afghans who risked their lives by helping the forces of Australian defense. According to local sources, the Department of Internal Affairs has already received more than 32,500 applications on behalf of more than 145,000 fleeing Afghans.
From the very first moments of the Taliban's entry into Kabul, in August 2021, the Australian Church had spoken out in favor of welcoming refugees. In particular, Msgr. Mark Benedict Coleridge, Metropolitan Archbishop of Brisbane and President of the Australian Bishops' Conference, said: "Several times in the past, Australia has come forward to respond to major humanitarian crises: therefore, I urge the government to be generous also in this case. The Catholic realities are ready to assist the institutions in the resettlement of refugees. It is our moral duty, moreover, to remain alongside those who, over the years, have supported the Australian military forces, who will most likely suffer reprisals for what they have done". (LF-PA) (Agenzia Fides, 10/2/2022)