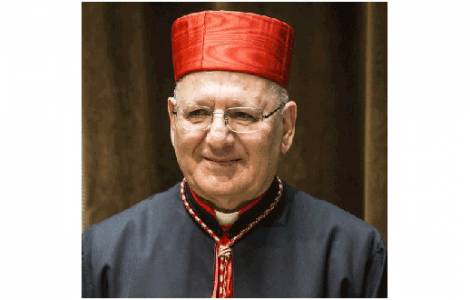 Baghdad (Agenzia Fides) - Ali ibn Abi Talib, the cousin and son-in-law, is considered by the Shiites to be the first Imam. Chaldean Patriarch Louis Raphael Sako quoted the Muslim scholar as saying at the beginning of his address, which he delivered on Saturday, February 5, to around two thousand representatives of Iraq's political parties: "Let your heart feel mercy towards your subjects and love and kindness towards them, and do not stand over them like ravenous beasts of prey plundering their food, for they are of two kinds: either your brother in religion, or your equal in creation".
The Patriarch gave the speech in a large conference hall in Baghdad on the occasion of the annual meeting hosted by Iraqi politician and religious leader Ammar al Akim, who headed Iraq's Supreme Islamic Council until 2017. The promoter of the meeting belongs to the influential Shiite Akim family. Born in Najaf in 1971, he was forced to flee into exile in Iran at the age of nine, along with his father, after Saddam Hussein's regime murdered seven of his uncles and sixty-two of his family members. Ammar Akim studied in Iran at the University of Qom, the main center for the study of Shia Islam, and is now associated with Iraqi Shia parties considered to be close to Iran. "In my speech", Patriarch Sako told Fides, "I spoke, among other things, of tolerance and stressed the central importance of school and education as areas that must be addressed in order to free the younger generations from the virus of sectarianism. I referred to the scourge of corruption, the risks of exploiting the so-called 'religious discourse', and the need to make laws inspired by the principle of citizenship".
The meeting hosted by Ammar Akim was attended, among others, by outgoing President Barham Salih, outgoing Premier Mustafa al Khadimi and the President of Parliament Muhammad al Halbousi. The only religious leader invited to address Iraqi politicians was Patriarch Sako, who began his speech by quoting Imam Ali's famous letter to Malik al-Ashtar, a staunch follower and governor of Egypt. The letter gives Malik al-Ashtar advice on how to deal fairly with the Egyptian people and is seen by some scholars as a model for any Islamic ruler who wants to act justly and with foresight. This invitation from a Shia leader to the Chaldean Patriarch is of particular significance considering that the country is at a critical political juncture following the October 10, 2021 general election. The ethnic-sectarian division of institutional offices stipulates that the head of state is elected from among Kurdish politicians, while the speaker of the parliament must be a Sunni and the prime minister must be a Shia. The latest elections, in October last year, confirmed the Sadrist movement led by Shiite leader Muqtada al Sadr, which now holds 73 of the 329 seats in parliament. The elections have changed the parliamentary weight of the pro-Iranian Shia parties, but so far they have failed to form a new government. Nor was it possible to elect a new President. (GV) (Agenzia Fides, 8/2/2022)

ASIA/LEBANON - The Annual Assembly of Maronite Bishops begins. Patriarch Raï: may God show his power by giving peace to the world