EUROPE/UKRAINE - The Salesian oratory, a place of proclamation of the Good News, in the midst of political and social tension 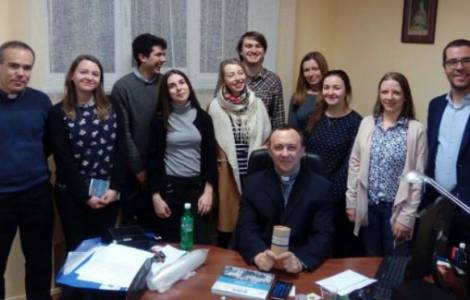 Kiev (Agenzia Fides) - "Our oratory is proving to be a refuge for many: Catholics, Orthodox, but also many non-believers. Young people spread the word using social networks, sometimes even involving their families. And the group grows every day. Since mid-December there is a strong tension". This was reported to Agenzia Fides by Father Max Ryabukha, a Salesian priest, Director of the "House of Mary Help of Christians" in Kiev, while winds of war are blowing all around, due to the worsening of the crisis between Ukraine and Russia. "The Ukrainian ecclesiastical community prays for peace - continues Father Max -. For a year now, when the situation in the country worsened again, the young people of the Salesian oratory in Kiev have taken turns praying the three Hail Marys and sharing a good night thought in the style of Don Bosco". The Salesian also comments on the initiative of the Pope who, last week, asked for a prayer for peace in Ukraine. "We feel less alone and stronger" says Father Max, "praying together can become a sign of hope, an engine of change, that shakes and questions conscience". On this path towards peace, while days of great tension pass, the Salesian family present in Ukraine works to support the population and sow, despite everything, some seeds of hope. The school in Zhytomir, the provincial capital with 300,000 inhabitants, northwest of the capital, Kiev, which Missioni Don Bosco supports through its benefactors. "Since 2016 the Salesians have run the Ukrainian-Italian ecumenical school Vsesvit", Fr. Michal Wocial, director of the Salesian house in Zhytomir, tells Fides. "The city - he explains -, does not offer afternoon activities for children, neither after school nor sporting or recreational activities". Precisely for this reason, the followers of Don Bosco intend to add an oratory to the educational center: "We want to build - continues Father Michal - an open space not only for the 200 students who already attend the Salesian school, but for all the young people of the area: through the oratory, many children and young people could find support in studies, entertainment, sports, games, sharing, in pure Salesian style ". The Salesian missionaries have returned to Ukraine since the 1990s, after the fall of communist regimes in Eastern Europe, and today they run eight centers. Their main work is education, where they participate in the organization of oratories, youth centers, schools and career guidance. "In more than 130 countries, the Salesians are committed to keeping schools and oratories alive for children and young people", says Father Andrzej Policht, a Salesian missionary of Polish origin who has been working for a few months at the Zhytomir school. "The common goal of all these works - he concludes - is to accompany young people on their path of growth and maturity, announcing the Good News and the charism of Don Bosco in a context in which there is a great need for spiritual guidance among young people". (ES-PA) (Agenzia Fides, 5/2/2022)