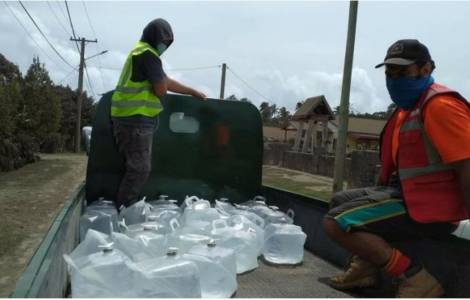 2022-01-27
Clouds of ash, lack of electricity and psychological trauma: the response of the Church

Sydney (Agenzia Fides) - The Churches of the Asia Pacific area, especially the Catholic communities in Australia and New Zealand, have taken action to help the population of Tonga, affected by the eruption of the underwater volcano Hunga- Tonga-Hunga-Ha'apai, on January 15th.
As Fides has learned, the Australian Church has launched a special fundraiser to support the population of Tonga who, through Caritas, its operational arm in support of the last, is working to restore communications with the island, in order to determine the most urgent needs. According to a note from Caritas Australia,
sent to Fides, states: "The volcanic ash and the saltwater floods caused by the tsunami waves have polluted the water reserves, so many communities will soon be left without drinking water. Tonga normally already has difficulties with its water supply because it relies on rain and underground reservoirs, so local communities could face a very difficult situation. From the little information we have, we know that the devastation is significant in coastal communities, whose homes have been damaged by the tsunami waves, as well as bridges and roads". Damaris Pfendt, Pacific Coordinator for Caritas Australia says: "Fortunately, Caritas Tonga already has emergency supplies in the capital and on the Ha'apai Islands, so it will be able to respond quickly to immediate needs. However, it is essential to step up aid. "Caritas Australia's fundraiser campaign, launched on the organization's website, will try to respond to such emergencies. Caritas New Zealand has also launched a specific assistance programme, in direct connection with Caritas representatives in Tonga, who are reorganizing their humanitarian aid work, identifying the most urgent needs, such as providing electricity generators to carry out all the activities for which energy is needed.
The Tonga government estimates that 84% of the population has been affected by the consequences of the eruption and tsunami. The island is still covered by a thick blanket of ash and it is feared that the health of the inhabitants will be affected. The Tonga archipelago consists of 169 islands and is one of 14 "Small Island Developing States" (Sids) in the Pacific. The region is one of the most catastrophe-prone in the world, and in the past has faced various natural phenomena such as cyclones, droughts and volcanic eruptions. Tonga, Vanuatu, the Solomon Islands and Fiji are among the 15 countries most at risk of extreme natural disasters in the world, and experts say they are especially vulnerable to the climate crisis and climate change. (LF-PA) (Agenzia Fides, 26/1/2022)

EUROPE/SPAIN - Aid trucks leave for Ukraine from Pamplona and Madrid