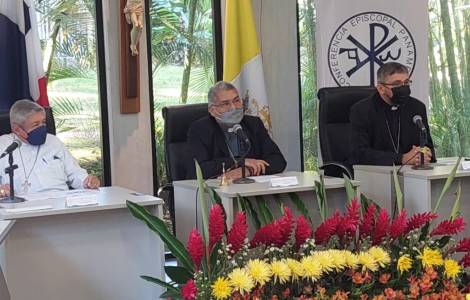 2020-11-26
National Dialogue seeks ways out of the crisis: Archbishop Ulloa calls on Christians to act consistently

2020-09-18
The Bishops: "Against the viruses that have condemned us to poverty and death, we have the antibodies of justice, charity and solidarity"

Panama city (Agenzia Fides) - "As we begin this year 2022, we are aware of the situations of division, polarization, intrigue, misinformation that exist in the various environments. We know that we have deep wounds due to all the injustices, corruption, drug trafficking, family disunity and many other realities. In these situations, faith makes forgiveness, reconciliation and hope possible". This is the exhortation of the Bishops of Panama at the end of their first plenary assembly of the new year, held from January 10 to 14, in which they prayed, analyzed and discussed the reality of the Panamanian Church and society. With regard to the life of the Church, in their statement sent to Fides, the Bishops underline that the Church in the world is living the synodal path, with its characteristics, and the recent experience, also synodal, of the First Continental Ecclesial Assembly celebrated in November.
"Synodality is not only religious, but also social - they highlight -, because God's plan is universal brotherhood in communion with Him. For this reason, this synodal process does not end with a document or an event in 2023, but it is a permanent style of being Church in which every baptized person, aware of his Christian commitment, assumes and fulfills his role in the construction of a more humane, supportive, fraternal and peaceful world".
The Church of Panama has also begun the process of preparing for the next World Youth Day, to be held in Lisbon in 2023, and which is considered "an opportune time for young people to rediscover their role, as protagonists of the great transformations that the Church and society require", helped by the Christian community, by adults and by a personal encounter with Christ. Most of the statement is devoted to social reality. "We know the problems and weaknesses we have to make Panama the country we deserve, where equity, justice and development reach everyone, without distinction", say the bishops, also urging "to make evident the great strengths with which we count to make a country project possible" and to "talk less and act more". Institutions must regain the trust of the population by putting the person and the common good at the center. This involves everyone: government, political parties, NGOs, churches, companies, the media, citizens in general. To manage the "country project" through a process of renewal in Panama, "it is necessary to break with the dominant logic, sectoral analysis, to find adequate and inclusive solutions. Allowing and stimulating the opening of different visions, supporting the contributions of 'others', will be fundamental for a new cultural, economic, political and social mentality, in order to build a New Panama".
In recent years, they point out how the insecurity of citizens has increased "to very worrying levels", in addition to drug trafficking that has penetrated various sectors of society, bringing death and destruction to Panamanian families. "Countering drug trafficking and violence requires everyone's efforts" exhort the bishops, inviting to eliminate the causes, such as "the impoverishment of large sectors of the Panamanian people, especially the youth, who have been robbed of hope, the opportunity to educate themselves, to entertain themselves healthily, to work with dignity", situations that make them vulnerable and sometimes make them give in to these social evils.
The Panamanian Bishops therefore express their satisfaction with the approval of law 567, on the protection of children and adolescents, which will allow society to advance in this field, also recognizing the right of parents to be the first guardians of their children. Appealing to Christian charity, they invite organ, tissue and blood donors to save the lives of many Panamanians who "who suffer from life-threatening illnesses and a transplant is the only thing that can save them. And we can make a difference". Finally, they appeal not to lose hope in the face of the increased spread of Covid-19 with the new omicron strain: "We cannot despair. Our greatest and most effective protection is to get vaccinated, not to avoid contagion, but so that its effects are not fatal... Let's continue strictly with biosafety regulations, to control the pandemic. If we add our individual, family and community efforts, we can stop the contagion". (SL) (Agenzia Fides, 17/1/2022)