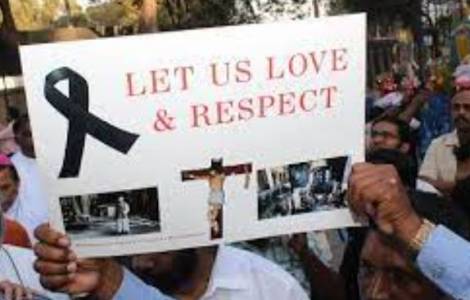 New Delhi (Agenzia Fides) - The year 2021 ended as the most violent year in history for Christians in India, recording 486 episodes of violence and hatred that shook the country. The Christian minority of the Indian population has faced attacks on many occasions by Hindu extremist groups throughout the country. The increase, year after year, in violence against a completely peaceful community came in the last quarter of 2021 reached alarming numbers. "The complaints presented reveal that there was more than one attack per day, reaching a total of almost 500 cases of violence in 2021, according to the United Christian Forum (UCF)", explains to Fides A.C. Michael, Catholic lay leader and UCF coordinator.
In the last three months of 2021 there were more than 180 incidents involving Christians shortly before Christmas. The monthly number of cases of violence was 37 in January, 20 in February, 27 in March, 27 in April, 15 in May, 27 in June, 33 in July, 50 in August, 69 in September, 77 in October, 56 in November and 48 in December.
"The climate of hatred that spreads through certain actions and speeches by some groups and the false propaganda about alleged fraudulent conversions seem to incite antisocial elements to carry out violent acts. The enactment of laws in the name of freedom of religion exacerbates the situation. It would not be an exaggeration to say that these events are well-orchestrated and planned acts by some groups with the aim of dividing the country based on religious issues", observes A.C. Michael in his converstion with Fides.
According to reports in the toll-free number launched by the UCF group, episodes of violence against Christians have been increasing sharply since 2014. They recorded 127 incidents in 2014; 142 in 2015; 226 in 2016; 248 in 2017; 292 in 2018; 328 in 2019; 279 in 2020; and, finally, 486 accidents as of December 30, 2021.
Overall, four states in northern India, Uttar Pradesh (102), Chhattisgarh (90), Jharkhand (44), and Madhya Pradesh (38) recorded 274 incidents of violence against Christians in 2021.
"Christians note that such states do not guarantee a favorable atmosphere for all citizens equally", notes Michael, a former member of the Delhi Minority Commission.
Even in a southern state, Karnataka, there is a high number of episodes of violence against Christians in 2021, a total of 59 episodes. Other states where there is violence against Christians are Bihar (29 cases), Tamil Nadu (20), Odisha (20), Maharashtra (17), Haryana (12), Punjab (10), Andhra Pradesh (9), Gujarat (7), Uttarakhand (8), Delhi (8), Telangana (3), Himachal Pradesh (3), West Bengal (2), Rajasthan (2), Assam (1) and Jammu and Kashmir (1 case).
The toll-free number of the UCF, through the work of its lawyers, managed to obtain the release of 210 detainees. In addition, 46 places of worship were reopened and permission for religious ceremonies to continue to have prayer services. However, only 34 official complaints (First Information Report) against violent perpetrators were filed with the police.
In nearly all reported incidents across India, "vigilante" groups made up of religious extremists raided prayer meetings or religious ceremonies. They use their impunity to physically assault people in prayer, before handing them over to the police on charges of forced conversions. We often see anti-Christian slogans outside police stations, while the police do not intervene. Violence against the Christian community is aggravated by the inability or lack of commitment of the police to investigate and prosecute the perpetrators. This is the case despite indications from the Supreme Court of India which has repeatedly called for these heinous acts of group violence to be stopped.
As many as 19 appeals are pending in various Indian courts, filed under the "Freedom of Religion Act" in nine states of India where such laws exist. Although such laws have been in place in some states since 1967 - for over 50 years - until today, no Christian has been convicted of forcing someone to convert. Furthermore, census after census, the Christian population remained 2.3% of India's 1.3 billion population (2019).
The UCF toll-free number was launched on January 19, 2015, to support India's fundamental freedom and the promotion of values such as justice, freedom, equality and brotherhood. The helpline helps people in need, especially those unfamiliar with the laws of the country, by guiding them on how to deal with public authorities. (SD-PA) (Agenzia Fides, 4/1/2022)

ASIA/PAKISTAN - The appeal of civil society to the government: Do not teach hatred towards minorities at school