ASIA/PAKISTAN - The President of Pakistan: a law will be made against forced conversions 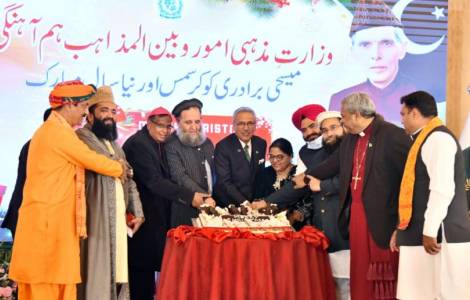 Islamabad (Agenzia Fides) - "Christians played an important role in the creation of Pakistan and many Christians, Hindus and Sikhs decided to remain in the country at the time of the partition with India. A law against forced religious conversions will be promulgated in Pakistan and children in schools will be taught the respect and sacredness of all religions and all places of worship": this is what the President of Pakistan, Arif Alvi said, in a meeting with religious leaders of various communities, held yesterday, December 21, in Islamabad, on the occasion of the celebration of Christmas. In addition to civil authorities, leaders of Christianity, Islam, Hinduism, Sikhism, Kalash and Baha'i were also present. As Fides learned, the President asserted that "today the world is in dire need of spreading the message of peace given by Jesus Christ and the Prophet Mohammed". And he recalled that "Jesus Christ was a great messenger of peace", inviting his compatriots to avoid oppression, conflicts and violence and to promote peace and social harmony.
"Today - he remarked - the world needs all the more to learn from the message of Jesus Christ and show mercy and forgive others". "Both the Prophet Mohammed and Jesus Christ - he continued - exhorted their followers to practice tolerance and to live in peace", recalling with sadness that humanity today is witnessing oppression, wars and massacres. For this reason, the President urged Christians, Muslims and members of other religions in Pakistan to "spread and promote the message of peace", citing the words of Pope Francis and words from the Gospel, such as "Do to others what you want to be done to you" (Mt 7:12).
The President denounced the recent incident of December 3, in Sialkot, where a Sri Lankan businessman, Priyantha Kumara, was lynched by the crowd on charges of blasphemy, and wanted to define the tragic episode "a cause for shame for the nation", noting that the teaching of religions is "compassion and kindness towards one's neighbor, humility". In particular, the President recalled that "great personalities belonging to the Christian community have served the nation of Pakistan" which, he said, "belongs to people of all religions, Muslims, Christians, Sikhs and Hindus". In fact, minority religious communities "played an important role in the creation of Pakistan and many Christians, Hindus and Sikhs decided to remain in the country at the time of the partition with India".
Dominican priest Father James Channan OP, director of the "Center for Peace" in Lahore, present at the meeting, comments to Fides: "We were delighted to be present at this event. Arif Alvi, president of Pakistan, gave a very encouraging sermon, on the teachings of Jesus Christ, speaking of peace, love, mercy and forgiveness. He placed great emphasis on respect for all and interreligious harmony. Among the guests were the Catholic Archbishop of Islamabad, Mgr Joseph Arshad, and Maulana Abdul Khabir Azad, Grand Imam of the Royal Mosque of Lahore. We believe that cultivating and living in good relations of dialogue and interreligious harmony contributes to creating a better Pakistan. Encounters like this are multiplied nationwide and can bring about enormous change in the mentality of the people in Pakistan, to eliminate violence, hatred, discrimination". (PA) (Agenzia Fides, 22/12/2021) 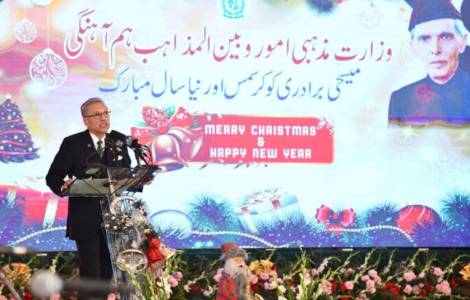