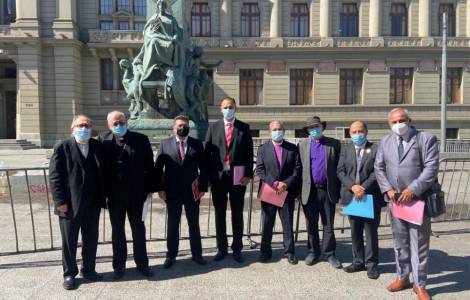 Santiago (Agenzia Fides) - The Chilean Episcopal Conference (CECh) invites all citizens to support the popular initiative which calls for the inclusion in the new Constitution of the right to freedom of religion and of conscience. To join this initiative, until January 6, it is necessary to enter the digital platform for popular participation in the Convention and follow the instructions. As specified in the note from the CECh sent to Fides, the initiative involves most of the Confessions and religious beliefs present in Chile, grouped together in a Working Group that has been active since August, to reach a common language and a joint proposal on the meaning of religious freedom and conscience in the Chilean constitutional order (see Fides 30/10/2021). The text that is now being proposed was therefore agreed during a process that involved numerous consultations and meetings between representatives of confessions and religious beliefs. "The Constitution guarantees all individuals: 1. Freedom of conscience and religion. Religious freedom includes its free exercise, the freedom to profess, maintain and change religion or belief, as well as the right to associate in professing and disseminating religion or belief, both in public and in private, provided that this is not contrary to morality, good morals or public order. The state cannot force any person to act against his or her religious convictions or beliefs and any person can refrain from any behavior contrary to them. 2. Confessions and religious beliefs are recognized as subjects of law and enjoy full autonomy and equal treatment in the development of their purposes, according to their own regime. Cooperation agreements can be concluded with them. They can erect churches, buildings and places of worship, which are exempt from any form of contribution.
Damage caused to such churches, buildings and places of worship and to people exercising this right, is considered an attack on the human rights of the persons concerned. 3. Parents and, where applicable, guardians have the right to ensure that their children or those in their care receive a religious, spiritual and moral education in accordance with their convictions".
Chile is still experiencing a period of crisis and uncertainty in all areas, which began in October 2019, with the mobilizations against the high cost of living and corruption. Violence and clashes have not spared places of worship. The plebiscite of 25 October 2020 (see Fides, 27/10/2020) marked the beginning of the process for the drafting of a new Constitution, the drafting of which was entrusted to a "Constituent Convention", whose members were chosen during the elections of May, 15 and 16, 2021 (see Fides, 3/7/2021). Presidential, parliamentary and regional elections took place on November 21. On December 19, a second round is scheduled between the two presidential candidates: José Antonio Kast, from the far right, and Gabriel Boric, from the left. On the eve of the elections, the bishops stressed that "for those who come to govern the country in the next period, the task will be difficult and complex" (see Fides 25/10/2021; 12/11/2021). (SL) (Agenzia Fides, 14/12/2021)