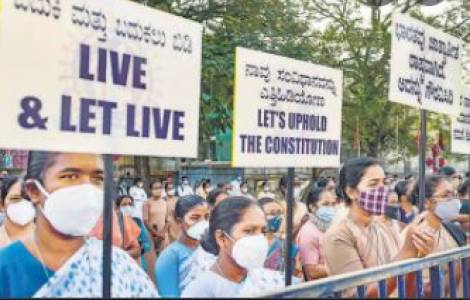 Bangalore (Agenzia Fides) – To oppose the anti-conversion bill that targets Christians in the state of Karnataka, in southern India. With this aim, the faithful of the state have launched an awareness campaign and various public demonstrations. Among the promoting associations, the United Christian Forum of Karnataka openly criticized the Prime Minister of Karnataka, Basavaraj Bommai, exponent of the nationalist party "Bharatiya Janata Party" (BJP): he, in fact, announced that, during the session of the state parliament, between December, 14 and 23, the bill will be presented to the assembly for approval. "The anti-conversion law is a violation of the fundamental rights of the Indian Constitution. It violates many articles of the Indian Constitution. Even B.R. Ambedkar, the main architect of the Indian Constitution, had also converted to Buddhism without the permission of the state", said Msgr. Peter Machado, Catholic Archbishop of Bangalore to Fides. "The Anti-Conversion Law is a shame for the coexistence and pluralism of the Indian nation. It is a dangerous law that could trigger inter-community violence", warned Msgr. Machado.
Christians also criticize the hasty procedure chosen by the government of Karnataka, which moved in the absence of a public discussion on crucial issues related to democracy, the rule of law and fundamental freedoms.
The entire Christian community in Karnataka opposes the proposed anti-conversion bill and disputes the need for this new provision, given that there are already enough laws and directives to monitor any abuse.
According to the rapporteur of the measure, Goolihatti Shekhar, a politician of the BJP, religious conversions "by force are rampant" throughout the state and more than 15,000 people, including his mother, converted to Christianity in his constituency.
The local administration of Hosadurgha has conducted an investigation into the allegations made by Goolihatti Shekhar; according to the result of the survey, there were no attempts or episodes of "forced conversions" and those who converted to Christianity did so voluntarily and freely.
Christian organizations contest the data on alleged proselytism. According to the 2001 census, Christians in Karnataka were 1.91%, while in 2011 they decreased to 1.87%. If there were "rampant conversions", it is observed, the Christian population in the state and in the nation should have registered an increase, but this is not the case.
The same trend can be seen on a national basis: the Christian community in India in 2001 was 2.34%, while in 2011 it fell to 2.30% of the population. Opposing the bill today, the Christians of Karnataka affirm in a Memorandum that the anti-conversion bill is aimed against religious minorities, who are therefore called to demonstrate. Similar "anti-conversion laws" are in place in various Indian states. In Orissa, eastern India, an anti-conversion law has been in place since 1967. Six other Indian states have passed similar laws which have resulted in increased attacks on Christians. (SD-PA) (Agenzia Fides, 14/12/2021)