ASIA/HONG KONG - Hong Kong's new Bishop consecrated: "The pandemic has taught us to help each other, this is the way" 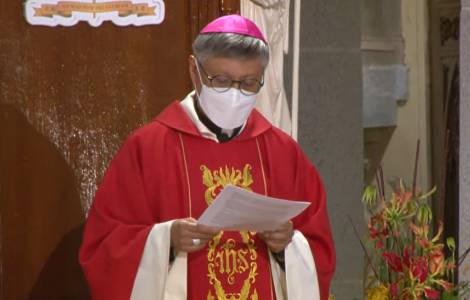 Hong Kong (Agenzia Fides) - "My desire is to be a bridge between the government and the Church in Hong Kong, between Catholics, Christians of other confessions and other religions ... It will not be easy after these last two years, but the pandemic has taught us to help each other ... The history of the Church in China and Hong Kong shows us that Catholicism is not an alien presence, but part of society", emphasizes the new Bishop of Hong Kong, Stephen Chow Sau Yan, a Jesuit, born in 1959, who was appointed head of this diocese at the request of Pope Francis.
Bishop Stephen Chow Sau Yan experienced his solemn consecration service on Saturday afternoon, December 4th, in the Cathedral of the Immaculate Conception, presided over by Cardinal John Tong Hon, Bishop Emeritus of Hong Kong. Immediately after the celebration, the new Bishop wanted to address to the faithful of his diocese who were present and especially to those who were connected online, a speech in which he showed the awareness of the difficult task that await him, but at the same time he said he was confident and determined, looking at the example of his confrere Matteo Ricci: "The pandemic has taught us to help one another, regardless of religious and political positions, this is the way". He concluded with a quotation from the message sent by Cardinal Luis Antonio Tagle, Prefect of the Congregation for the Evangelization of Peoples: "The Lord does great things, we just have to know his ways and follow them. For this he asked everyone to pray. The solemn ceremony was attended by representatives of the various religious communities involved in pastoral care and missions, representatives of the local church, delegates from other religious denominations and representatives of the civil authorities under the direction of the Catholic Governor Lam Cheng Yuet-ngor. The faithful could follow the transmission of the ordination on the website of the diocese. After his pre-university studies, he earned his bachelor's and master's degrees in psychology from the University of Minnesota in the United States. Then on September 27, 1984 he entered the Society of Jesus. From 1986 to 1988 he completed his novitiate and licentiate degrees in philosophy in Ireland. From 1988 to 1993 he continued his theological studies in Hong Kong, where he was ordained a priest on July 16, 1994. He earned a master's degree in Organizational Development (1993-1995) and a doctorate in human development and psychology from Harvard University in Boston (2000-2006). Since 2007 he has been director of two Jesuit schools in Hong Kong and Wah Yan, Kowloon; Honorary Professor at the University of Hong Kong (2008-2015) and Instructor to the Jesuits (2009-2017). Since 2009 he has been chairman of the Education Commission of the Chinese Jesuit Province and since 2012 lecturer in psychology at the Holy Spirit Diocesan Seminary in Hong Kong; From 2012 to 2014 he was a member of the Presbytery of the Diocese of Hong Kong, from 2013 to 2017 Provincial Consultant and since 2017 a member of the Diocesan Education Council. Since January 1, 2018, he has been Provincial of the Chinese Province of the Society of Jesus and, since 2020, Deputy Secretary of the Association of Superiors of Religious Men’s Institutes in Hong Kong. (NZ) (Agenzia Fides, 6/12/2021)