AFRICA/NIGER - "The difficult road to the border": growing threats against Christian communities 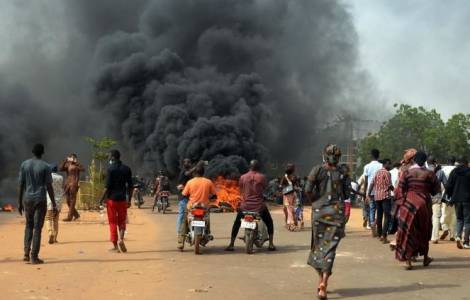 Niamey (Agenzia Fides) - "This is the first time that an explosive device has been placed on the road leading from Niamey to the border with Burkina Faso. The explosion left at least three dead and several injured, some in serious condition. A pick-up truck belonging to soldiers who were leaving for Makalondi in order to help their comrades in difficulty was also destroyed". Father Mauro Armanino, priest of the Society for African Missions, returns to write to Fides about a new attack that persists near the diocese of Niamey. The episode mentioned by the missionary occurred on Saturday, November 27 and, according to him, "prevented the parish priest and the religious from visiting and consoling the many faithful of the parish of Makalondi. The celebration of the first Sunday of Advent was carried out by catechists and community leaders, without them".
Christian communities in villages, although they are not the only ones to pay in terms of threats and intimidation because of their faith, are particularly targeted. The diocese of Niamey strives to provide food and school fees for students in primary schools in Makalondi and Torodi sectors, less than 100 kilometers from the capital. "The displaced people from the villages of the parish of Father Pierluigi Maccalli, kidnapped and released (see Fides, 9/10/2020), are emptying and the children are forced to interrupt their studies or go elsewhere to continue them", explains the missionary. A French military convoy was blocked in the Burkinabe city of Kaya, on its way from the Ivory Coast to Mali, by hundreds of protesters angry at the failure of French forces to contain terrorism.
Against the backdrop of anti-French sentiment that has spread from Mali to Burkina Faso and, at least in part, to Niger, there are fears of new hardships for farmers and especially for young people and fragile Christian communities. "The use of improvised explosive devices along the road leading to the border is a new and worrying fact about the increased capacity of armed groups to sow death and desolation", said Father Armanino.
"In the other affected area of the diocese, that of Dolbel, a few days ago, a mobile telephone tower was overthrown by armed groups. Fear is growing among people who feel abandoned every day. Right now the time seems to have come to stand up and look up, because the hope of the difficult road that leads to the border is near". (MA/AP) (Agenzia Fides, 30/11/2021)