VATICAN - For a Church which is always and entirely missionary 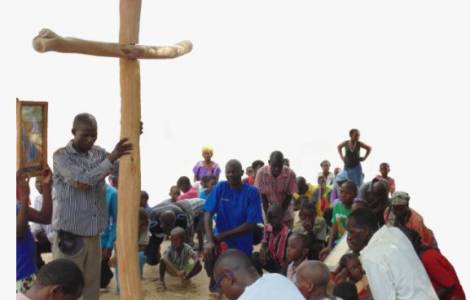 Vatican City (Agenzia Fides) - If the month of October, which the Church defines as "missionary month" is a special time during which the Catholic faithful all over the world are called to rediscover and renew their missionary vocation, received by virtue of baptism, it is also true that "the Church is missionary by nature" and that the work of animation, promotion, awareness certainly does not end in one month a year. On the contrary, the work lasts a lifetime. Father Dinh Anh Nhue Nguyen OFM Conv. Secretary General of the Pontifical Missionary Union, as well as Director of the International Center for Missionary Animation and of Agenzia Fides is convinced of this. Recalling the charismatic figures of Paolo Manna and Pauline Jaricot, Father Dinh Anh Nhue Nguyen OFM Conv illustrates to Agenzia Fides, at the end of the missionary month, the activities and spirit of the Pontifical Mission Societies, engaged in universal collection, prayer and missionary communication for 365 days a year.
Father Nguyen says: "In the name of the Pontiff and as Pontifical Mission Societies (PMS), we are concerned with the promotion and animation of the evangelizing mission of the Church in the world. We are very grateful to Pope Francis for his moving thanks to the missionaries, and we gladly join him in always expressing our gratitude to those who spend themselves generously "on the front line". And we, what can we do to make this gratitude even more concrete even if are we not "on the front line?" In this regard, I think of a champion of missionary animation: Blessed Paolo Manna, founder of the Pontifical Missionary Union (PUM), one of the four Pontifical Mission Societies. Using an image and the specific language of his time (we are in 1918, at the end of the First World War), he writes: "In war there are always those who are at the front and those behind. What do those behind do for the soldiers who are fighting? They speak of them with great admiration. And do Christians talk about missionaries? Do they feel sympathy and admiration for them? Those behind pray for the soldiers at the front and send them many things. And you, do you pray for the soldiers of Jesus Christ, for the missionaries, so that the Lord gives them strength, courage, patience and all the necessary graces? What do you Christians from behind send for the missions?" These are holy words that have not lost their relevance. This is why PUM has proposed them to everyone on its web page for the missionary meditation of this month of October. Yes, supporting the missionaries "on the front line" with intense and incessant prayer must be the first commitment and, at the same time, an act of gratitude on the part of all those who are "behind", to use the expression of blessed Manna. And then, speaking of them with sympathy and admiration, one must also try to collect the necessary aid material to send for their mission of evangelization. These are the intuitions that another champion of missionary animation followed, Pauline Jaricot, foundress of the first Pontifical Missionary Society, that of the Propagation of the Faith, that is to say "prayer and charity" to support missions and missionaries abroad". (...) (- continues) (Agenzia Fides, 30/10/2021)